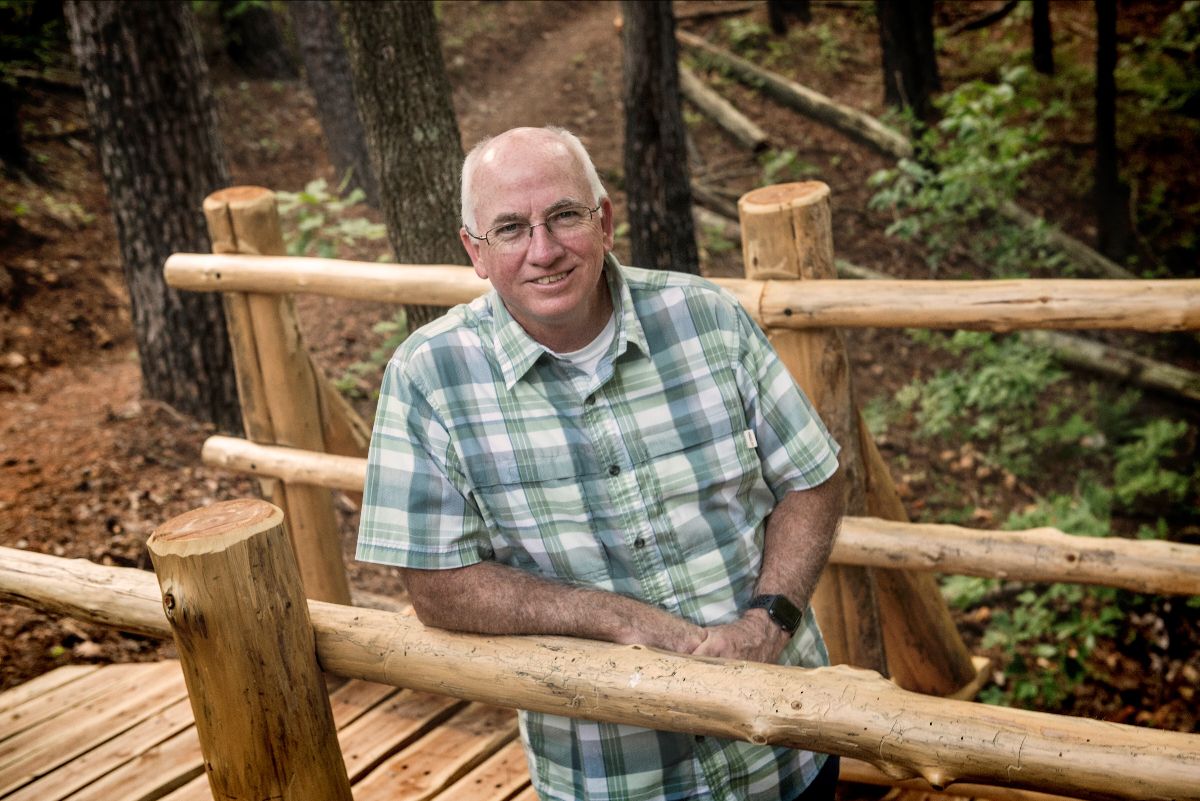 Below is the media release announcing the retirement of Arkansas State Parks Director, Grady Spann. Something not mentioned in the release is his extraordinary leadership in creating and improving trails in the state park system. For many of us, outdoor recreation starts at the trailhead and Director Spann has overseen one of the largest growth periods of trails in the state park system since the Civilian Conservation Corps built trails in the 1930s. It is safe to say that the Monument Trail system would not have happened without him at the helm of Arkansas State Parks. Another project that was near and dear to Director Spann was the completion of the Delta Heritage Trail in eastern Arkansas. The construction of this rails-to-trails project had remained relatively stagnant for years when the director actively began searching for and finding funding that would make its completion a reality. While it is not yet complete, he leaves a plan and funding that finally makes this exceptional recreation facility a reality. We at Arkansas State Parks would like to thank Grady Spann for his years of service and his leadership in trail building.

“Grady has been a true leader of the parks and a very valuable member of my team,” said Stacy Hurst, secretary of the Arkansas Department of Parks, Heritage, and Tourism. “He has moved up through the ranks in our parks system and is highly respected by his peers in the country’s systems of state parks. We will miss him but wish him all the best in this new chapter of his life.”

See also  A Welcome Center That Focuses on Waterfalls

“My decision to retire was made knowing that we have a strong and talented team in place that will move Arkansas State Parks forward. A new director will have an opportunity to take the nation’s best park system to a new level of efficiency and service,” said Spann. “I believe the greatest accomplishment over the past six years has been just simply serving people and making them feel welcome in parks. Every park employee has played a vital role in this.”

“I have a passion for ‘honoring tradition while seeking innovation’ within state parks. This has been my focus for the last six years,” Spann added. “I think it is important to honor the deep roots and history of state parks while continually seeking innovation and asking staff to be forward-thinking and relevant for today’s guests and generations to come.”

Spann joined Arkansas State Parks in 1993 as the superintendent of Parkin Archeological State Park. In 2002, after nine years at Parkin, he transferred to Historic Washington State Park to serve as the superintendent. In 2005 he transferred to the Ozark Folk Center State Park where he served as the Park Superintendent until 2012. After seven years at the Ozark Folk Center, Spann was promoted to serve as the Region 5 Supervisor, a newly created region that oversees all lodge parks. In 2016, he was promoted to director of Arkansas State Parks. Spann also served as a park ranger after graduating from the Arkansas Law Enforcement Training Academy in 1995. He is the past president of the National Association of State Park Directors (NASPD), past president of the Association of Southeast State Park Directors, and formerly the Chairman of the Board of Regents for NASPD State Park Leadership School.

Prior to working for Arkansas State Parks, Spann served in the U.S. Army for nine years as a military tactical intelligence and counterintelligence officer. He was stationed at Fort Huachuca, Arizona; Fort Polk, Louisiana; Rio de Janeiro, Brazil; and in Washington D.C. He has been awarded the Meritorious Service Medal, Army Commendation Medal, Army Achievement Medal, National Defense Ribbon, Army Service Ribbon, Overseas Service Ribbon, and the Pacifist Medal from the Brazilian Army.

The state parks have 1,800 campsites, 1,050 picnic sites, 208 cabins, five lodges, and 415 miles of trails. Eight million visitors annually come from all regions of the country. Park staffs provide over 42,000 education programs, activities, and special events to more than 700,000 participants each year.

Established in 1923, Arkansas State Parks preserve special places for future generations, provide quality recreation and education opportunities, enhance the state’s economy through tourism, and provide leadership in resource conservation. Connect with us on Facebook, Instagram, Twitter, and visit ArkansasStateParks.com and ArkansasStateParks.com/media to learn more about everything we have to offer.