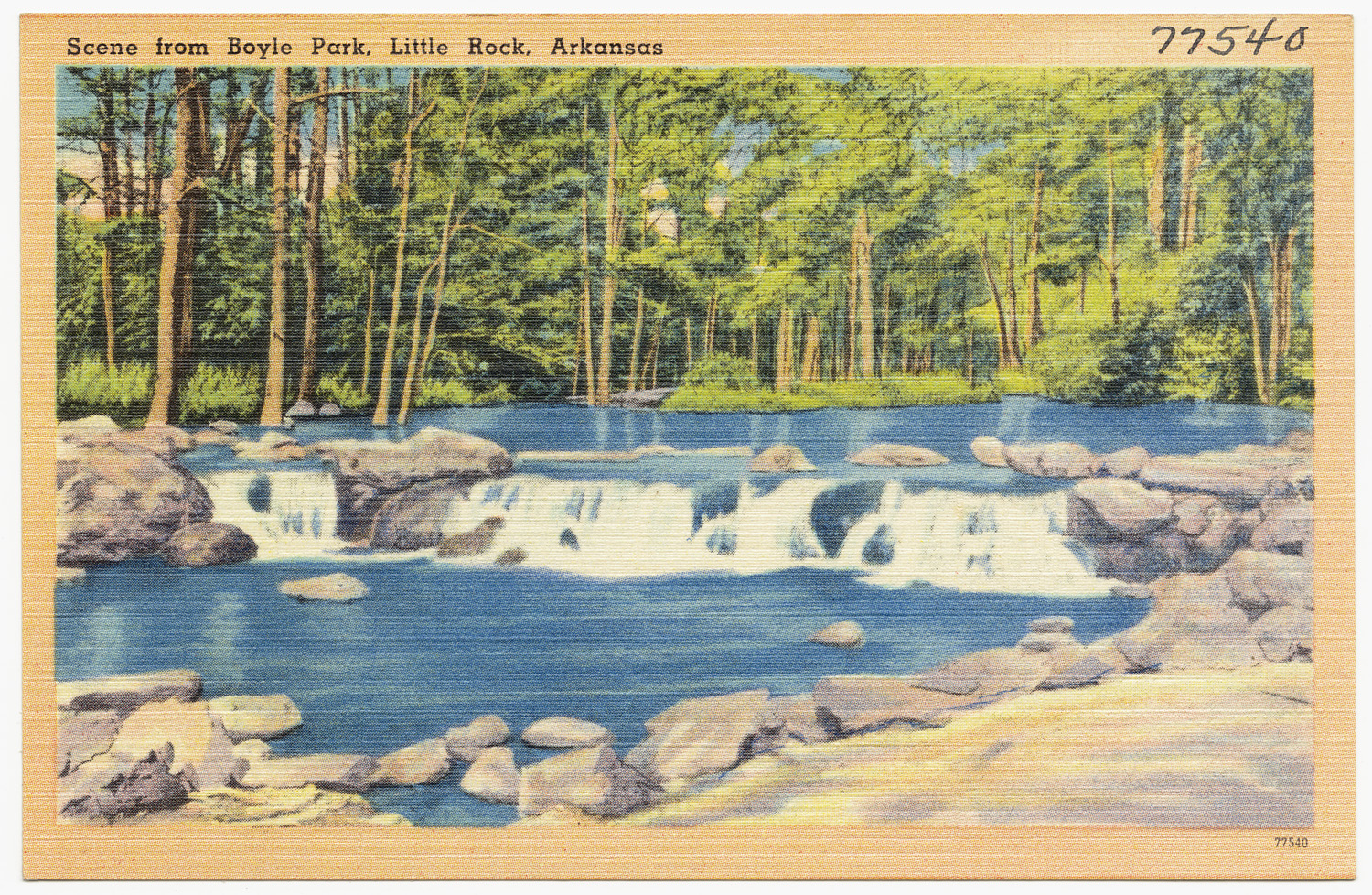 Back in the 1930’s under the direction of President Roosevelt, the Civilian Conservation Corps was formed. The “Tree Army” as it was referred to provided work and taught skills to depression era men across the United States. Some of the most endearing places they worked later became national, state and city parks. In Arkansas the cabins, lodges, dams and trails they created are preserved in places like Devil’s Den State Park, Petit Jean State Park, Buffalo Point on the Buffalo National River and White Rock Mountain in the Ozark National Forest among others.

After building amenities at Devils Den,  CCC Company 3777 showed up in a soon to be city park on the outer western edge of Little Rock, a place called Boyle Park and after building bridges, pavilions and trails in this park they then moved on to construct facilities at what is now Lake Catherine State Park. Today that city park is no longer on the outskirts of  town, it’s centrally located in the midtown area and is a much more urban park than when the Tree Army was working there. Many of the structures they built are still there, the trails, like portions of paved trails built more recently have been washed away with time.

New trails were built many years ago throughout the western section of the park and smaller sections of the eastern edge of the park. These trails were used by mountain bikers over the years including beginner women cyclist classes and after work riders just trying to get a few miles in before the light fell. With improvements in trails at Burns Park in North Little Rock, a resurgence in mountain biking activity at Camp Robinson and the new trails at Pinnacle Mountain State Park, the trails at Boyle Park became all but forgotten. After a cyclocross event this past fall at Boyle (held mainly in the large field near the playground) I decided to give the trails a ride. I made it about 50 feet before having to dismount for a log…and then another log. The trail was barely visible, covered with leaves I was soon finding my way on old memories alone. Trees and leaves littered the trail and after less than a quarter mile of riding I gave up and rode on home, disappointed in myself that the closest mountain bike trails to my house had fallen into such disrepair.

The folks from the newly formed Central Arkansas Trail Alliance stepped in. A workday was put together in December and in one day with the help of Little Rock Parks and Recreation employees the trails in the park were put right. I went out a couple of weeks later and rode them all. I noticed the opportunity for a few of the old trails to be revitalized but in all I rode about 6 miles of trail in a small urban park. Not bad, and only 5 minutes from my house.

The park has three mountain bike trails, on the northwest side of the park is the largest and easiest section, a perfect place for beginner riders. Lots of turning and relatively flat except for a short bit that drops down to a pipeline swath. The South Nature Trail is rather short and runs between the far south (old) entrance to the park and the original pavilion area. The North Nature Trail runs between Archwood Drive and the park sign on Boyle Park Road. The North Nature Trail is by far the most technical trail in the park with tough climbs and rock gardens, a lot of fun for the experienced rider.

As the days start getting longer, Boyle Park Trails will be a welcome way to end the day once again. Trail runners and mountain bikers can once again enjoy this great system of urban trails.

Here is a short video showing some of the terrain at Boyle:

Central Arkansas Trail Alliance is on the move and their next trail clean up will be the Jackfork Trail at Pinnacle Mountain State Park on February 9th. More information can be found on their website or by liking their Facebook Page.  The group will soon be a chapter of the International Mountain Bicycling Association and has big plans for expanding mountain bike trails in central Arkansas and maintaining the trails we have. As a reminder, all mountain bike trails in Arkansas are open to hiking and trail running so you don’t have to travel on two wheel to appreciate what this group is doing. Lend your support.

READ  2021 UCI World Cup to be hosted by Fayetteville, Arkansas

More information and history of Boyle Park can be found in this downloadable PDF.