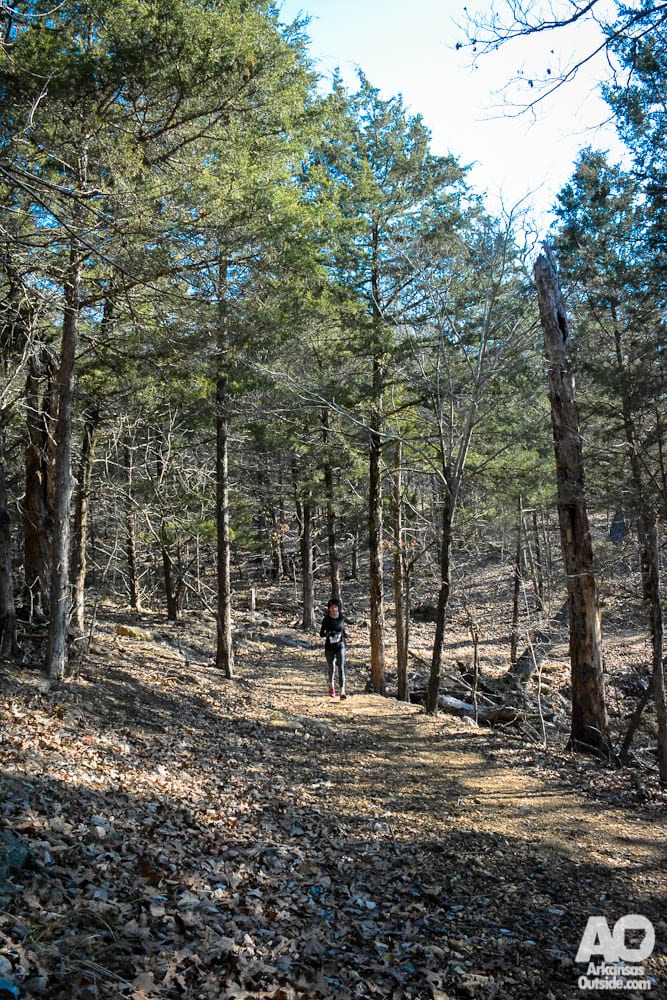 As we were driving through the winding mountainous route between Little Rock and Mountain Home Friday night, my Facebook feed continuously taunted me with photos of the big house by the lake that friends rented to stay in before and after the inaugural David’s Trail Endurance Run. They had a fire pit, a grill, 3 bedrooms and a kitchen/dining room large enough for the group to cook and eat a great pre-race potluck meal. We got a late start after work and would miss the first night of fun, but there was more to come- a beautiful trail to explore, friends to see, and a post-race party to look forward to.

Sleeping in before a race is a luxury, especially on those cold mornings when an hour or two is the difference between snotcicles and just plain chilly. With a 9 a.m. start, David’s run even allowed those who had a couple of hours of travel time to drive from home instead of an overnight stay. Many runners chose to take advantage of the cabins at the start/finish line at Rocking Chair Resort. It’s a treat to be able to walk out the front door to the starting line. For those not staying quite so close, and those involved in socializing before the race, there were fire bowls and Bear State Bank’s large grill putting off heat to warm runners who were dressed for the heart pumping fun of the day, not standing still on a sub freezing morning.

The start was a little crowded for those of us in the middle to the back of the pack as the double track quickly turned into single track. The course for both the 25K and 7K would start on a 7K extended figure 8 where part of the course is two way traffic with two loop sections. This southern end of the route is technical with off camber climbs, rocks, roots, and one steep drop where race directors placed a knotted rope for those who wanted a little extra precaution since runners would be going both up and down. The lake level at race time was still higher than usual; it was high enough in the week prior to the race to force the cancellation of the planned 40K route which will be back on for next year’s race. It also damaged enough of the 7K route that race directors Paul and Jacob had to build some of the lower sections of trail to replace trail that was underwater on race day.

For more experienced trail runners, technical single track is where it’s at. Most excel at skimming rocks, avoiding roots, and loving the mud. For newer trail runners, there is a learning curve and the technical trail runs are more challenging. It was a test of will to pass up the finish chute for the 7K and keep going following the adventure the topography of the first few miles provided. The 25K section started with a downhill switchback to a mossy creek bed flowing down toward the lake. The terrain eased to smoother surface allowing eyes to drift off the path in front to take in the view along the lake edge.

With winter leaf off, the views of the sunlight shimmering on the water were a nice distraction from the usual thoughts about pace, pain, or pulmonary failure. This northern 11K section was a straight out and back so I had the chance to cheer on several friends who were well out in front of me as they made the return trip. The hills echoed with all the calls of  “good job”, “looking strong”, “good work” as runners passed each other coming and going. The aid station at the turnaround was a welcome sight, volunteers already had the Honey Stinger Waffles opened and out for easy grabbing. They filled my water bottle as I shoved a waffle in my mouth and set back out on the trail. I stopped a few times on the return trip, a couple of times for photos and a couple for other reasons and by the time I reached the road to the finish a second time, it was less of a temptation to head to the finish line instead of heading straight back onto the the second run of the 7K route.

I enjoy the technical stuff; I’m not a fast runner on any terrain, but I feel like the rocks and roots are more suited to my low center of gravity slow style of running. Plus it’s more interesting and holds my attention, which I appreciate. It is much more difficult to contemplate life’s hardships when your concentration is on not splaying your body across the mud. The second time was more familiar, knowing what to expect made it a little easier to keep going. Unfortunately I was carrying a water bottle much to small for my needs and I was dry. Thankfully that figure 8 course meant I ran into faster friends coming back at me so Katy and Stephanie were able to fill my bottle before they headed in to the finish. There is one last climb to the finish and I could hear the music and cheers long before I got there. Race Directors Paul Gigliotti and Jacob Anderson were there with a finishers medal and friends were waiting to cheer me in.

The finish line is not the end of this story. The race directors planned for runners to stay and enjoy the day by having plenty of food, beer, and even live music. For those who stayed in one of the cabins on site, hot showers and a change of warm clothes allowed them to stay out in the still cold afternoon. By encouraging runners to take advantage of accommodations right at the race site, they provided a great convenience to the runners and spectators as well as an economic boost to the area that is more a summer destination than winter. As the after party slowly diminished, our group headed back to the rented lake house to build a fire, grill some burgers, and to entertain each other as well as the race directors who stopped by to continue the after party with us.

This great run benefits the trail expansion efforts on David’s Trail to a 50+ mile multi-use system and a K12 program encouraging kids to get outside and appreciate nature. Join them next year for more trail and more fun. Results are posted here

We will also have several hundred more photos to share in the next day or two on our Facebook page.