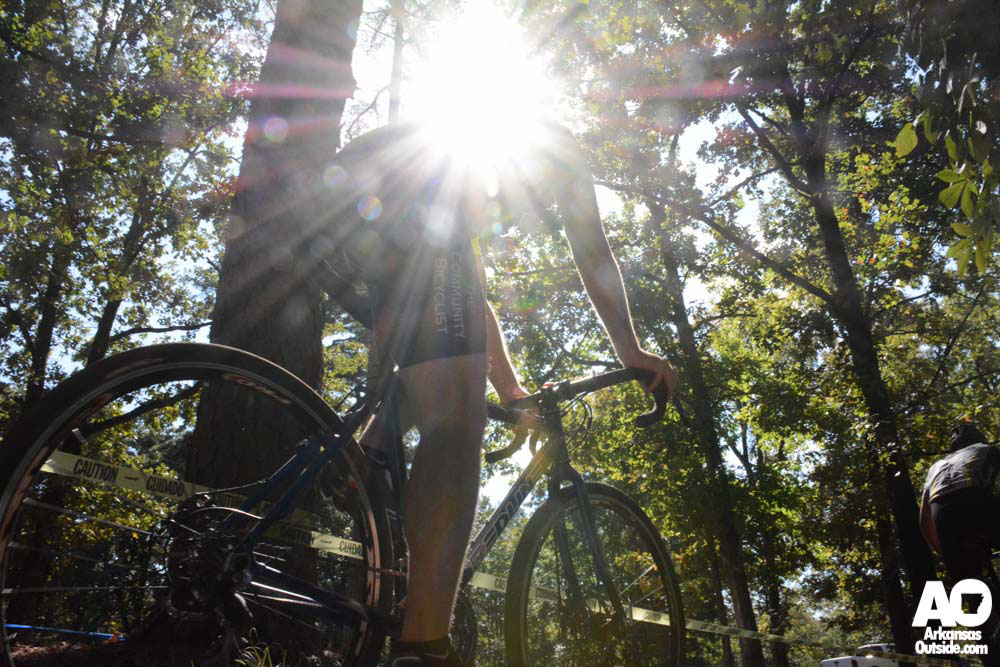 Enter the Coliseum of Cyclocross

As I walked part of the course with Chad, we looked at the lines and the barriers. He looking at spots he could work an advantage, me looking for good camera angles and being a little jealous that he would be entering the coliseum to take on the lions while I just watched and documented the carnage. One of the early obstacles would be an old foundation from a long ago ruin. Chad felt if he got the inside line he could force other riders to make a tough hop or dismount, working the obstacle in his favor. I saw it as a spot to shoot pictures of wheels in the air, everyone likes pictures of their wheels in the air.

It’s no secret that I love covering cyclocross events, the cooler temperatures, the pain faces, the bike porn. I wait all year for its autumnal rebirth into the fields and hills of local parks. Don’t get me wrong, criterium racing and mountain biking are exciting spectacles of cycling prowess but combine them, add cold and sometimes rain and snow and you have a truly epic event. The gladiators of the sport race for a set amount of time much like the crits but throw in barriers that have to be crossed, sections that can’t be ridden even by the most accomplished of riders forcing them to jump off and back on their metal steeds, running with their bikes up grassy, wet hills, dismounting and remounting with blazing speed all while trying to keep the competition at bay. And then there are the spectators.

Proper spectating at a cyclocross event is a full body, top of the lungs, screamfest. Because the racers don’t have enough to think about as they work their way through crowds of cyclists, around tough turns, up even tougher hills, all while legs and lungs are telling them to stop, spectators are yelling both encouragement and ridicule. The job of the spectator is no cushy Caesar’s job of providing a thumbs up or down on the gladiators or their prey, this is full on participation. Constantly moving from one section of the course to another taking great joy in the agony of the participants on two wheels. As a spectator, if you walk away from a cyclocross race and are not exhausted, you’re doing it wrong.

Glad to have it back

It’s been a couple of years since the Gearhead Cyclocross race was in the Arkansas Super-Prestige Cyclocross Series. They held the race last year but unfortunately the race coincided with the final race of the Arkansas Mountain Bike Championship Series. Since many were still trying to get their points in at the AMBCS series, the cyclocross race  wasn’t as well attended as it might have been. This year was different and it was a perfect day for the race.

Craighead Forest Park in Jonesboro is a beautiful park with full amenities, camping, a beach, mountain bike and hiking trails, basketball and tennis courts, disc golf, just about everything you’d expect from a classic Arkansas park. With typical Fall temperatures in the 70’s, the park was buzzing with activity. The venue for the race was on one of the fingers to the lake, complete with playground, bathrooms and plenty of parking.

The course started with an uphill pavement section allowing the pack to spread out just a bit before heading into two hairpin turns around large pine trees which had shed just enough needles to make the turns a little treacherous. This was followed by a gradual uphill climb with a couple of ninety degree turns before getting to the old foundation. Another tight run section was followed by a fast straightaway to a road crossing with a little hop on the asphalt. A straightaway in the dirt led to a rooty single track section that cut through the woods and popped out on a power line swath with a steep downhill and then quick uphill into two barriers that were placed just high enough to keep everyone from attempting to jump them. Riders then ran to the top of the hill before remounting and heading into a fast section until they dropped down near the lake. After going around the playground they were greeted with an off-camber short uphill section before dropping back down to the road where they started another brutal lap. All of this action takes place in a one mile course. In talking with some of the riders  while they were warming up, they said the course was pretty bumpy. The soil in this part of the state never really hardens up leaving roots and clumps of grass exposed to wreck havoc on stiff framed bikes.

Although the temperatures felt great for standing around outside, for racers it was excessively warm. The first race started at 10 am and consisted of Women’s category 1, 2 and 3, Masters and Men category4. Unfortunately only one woman showed up for this race, Heather Ladd of Team Community Bicyclist showed how strong the women can be. Hopefully more of these tough competitors will show up as the season gets going. This was a 45 minute race which was plenty for most of the racers although some would be back for more later in the day.

The next race was at 11:15 and included the Men’s Category 5, Juniors and Women’s Category 4. This is a 35 minute race and is an excellent learning opportunity for riders who are new to the sport. This group included a large percentage of mountain bikes, the gateway drug to the sport of cyclocross. I have made a promise to myself to give the cat 5 group a try this year. I worry that I will get hooked.

At 1 pm it was time for the open class. Occasionally this class is mistaken by newbies to be a group of like minded beginner racers, but they would be wrong. This is the fastest, longest race lasting 55 minutes and pitting the most skilled riders in the state against each other. For some of the men’s cat 4 and masters racers, this was a chance to torture themselves as they joined in the fray for their second race of the day. As the course drained energy from the racers, I saw two tumbles at the barriers. Muscles were fatiguing as cyclists worked to lift bikes and bodies over the wooden planks. One of the lead riders flated but a quick change had him back in the race in third, he was strong and quickly made his way back to the front passing the second place rider shortly before the finish as we screamed and hollered.

As riders stood straddling their bikes after the race, too tired to lift their legs over the frames just yet, war stories were shared, congratulations exchanged and some sizing up of the competition was done. This is only the first race of a season and the first look at the opposition. The series will be running well into December, there is a lot of racing to go.

You can see the entire Arkansas Super-Prestige Cyclocross Series calendar on their website. Grab a cowbell or noisemaker of some sort, clear your lungs and come shout at the racers. It’s all good fun but be careful, it’s easy to be drawn into the Coliseum of Cyclocross.

Oh, and Chad’s plan worked pretty well taking a strong third place in the open division. It pays to know the course before the race.