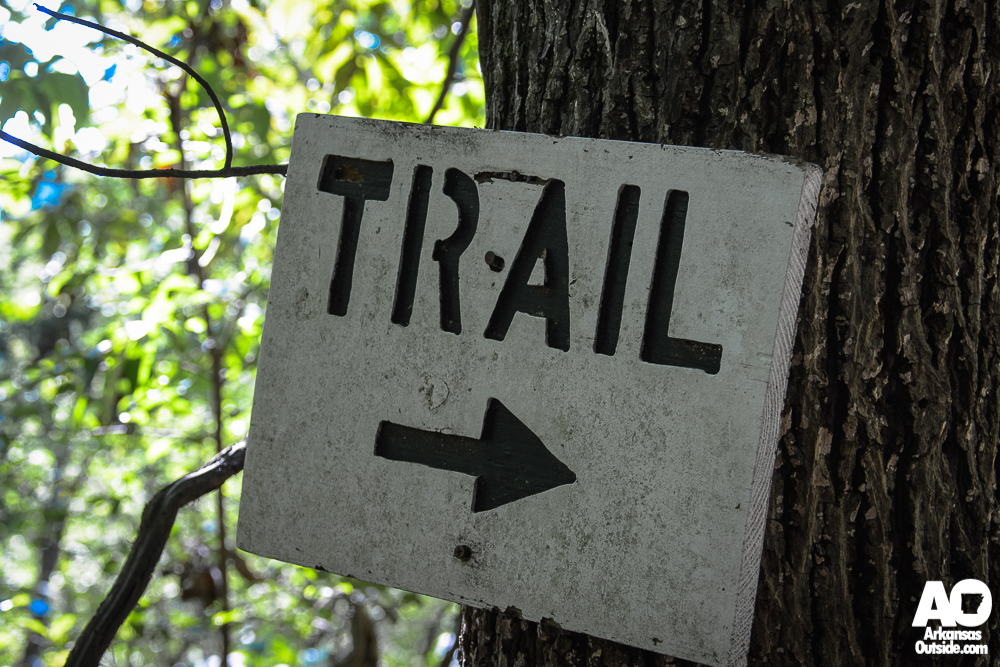 Hike or Paddle or…

This past weekend we spent some time exploring Fairfield Bay, Arkansas. Fairfield Bay is a small town of almost 2500 people, a resort community tucked into the north shore of Greer’s Ferry Lake. Surrounded by the beautiful Ozark Mountains with access to one of Arkansas’s pristine lakes, the town has a lot to offer visitors who enjoy the outdoors.

We met local realtor, community supporter and outdoor enthusiast, Debbi Brawley and her daughter, Rachel, early Saturday morning for a short hike in one of several areas of the town recently opened up to exploration. Areas that had previously been planned for vacation homes are now available for vacation fun. The roads originally planned for the subdivision have been roughed in and are currently growing over leaving trail like routes throughout these idyllic woods.

As we hiked, Debbi filled us in on the homeowner’s association plan to convert these areas to trails for both hiking and mountain biking. Large rock outcrops pepper the landscape of flowing, rolling hills; an ideal landscape for trails. After over three miles of hiking we were back at the cars.

We heard of an Indian Rock Cave nearby so Debbi was kind enough to take us over to the trail head near the Indian Hills Club House. The hike to the cave was short, but the trail continues on for those who want to enjoy the multitude of smaller rock crepuscular caves, slots, and other rock formations. We noted with interest that homesteaders from the turn of the century often carved their names into the rock. I wondered aloud if some day people will see the modern graffiti that we consider a scourge on our natural areas as something more significant.

We headed  back to our base of operations to change clothes and get something to eat before the day’s big adventure. A short drive to the Fairfield Bay Marina took us past the newly installed disc golf course, several restaurants, a fitness center, the conference center, and the campground. There were two kayaks waiting to take us on a trip I had been wanting to do for several years. Out in the middle of the lake is Sugar Loaf Mountain, an island that towers over the water, a ring of bluffs protecting its summit. The only sign of civilization visible from the water is a small dock on the south side of the island. That spot would be our first goal of the afternoon, a little over a mile and a half across open water.

The lake was not as busy with boaters as I expected which made the trip across uneventful. The sit-on-top kayaks which can be rented at the marina were very stable in the water and within an hour we were pulling up on shore near the dock. A couple of party barges filled with folks on guided tours were just leaving as we arrived, but there were some other small vessels around, today we would be sharing the island.

The trail goes up from the shore, not unlike climbing Pinnacle Mountain in Little Rock. Eventually it meets up with the Terrace Trail, a trail that goes around the island just below the bluff line. We wouldn’t have time for that today, our goal was the Mule Trail that bisects the top of the mountain. In years past, the climb to the top involved a rock scramble, wedging yourself between rocks to access the top. Now there are steps, a lot of steps, to take hikers to the incredible views of the lake.

We hiked the trail across the top to take in views from both sides before turning and retracing our steps down the mountain. The second part of our journey was done and well worth the trip. Back in the kayaks we headed back to the marina, it was a long paddle and I noticed we were taking more rests as our arms fatigued. We made slow progress, enjoying the view of the wooded shores where trees are just beginning to hint at the fall color that will erupt in a few weeks.

We rewarded ourselves with a some ice cream from the marina. We had time to relax in our hotel room before meeting some new friends for dinner at the Top of the Rock club.

Fairfield Bay leadership is working hard to attract new visitors, plans are being made for more trails including mountain bike, equestrian and possible ATV trails. Of course they already have golf, disc golf plus the lake and the community hosts several events to showcase those amenities. Keep an eye on Fairfield Bay, it’s another beautiful outdoor venue in the Natural State.