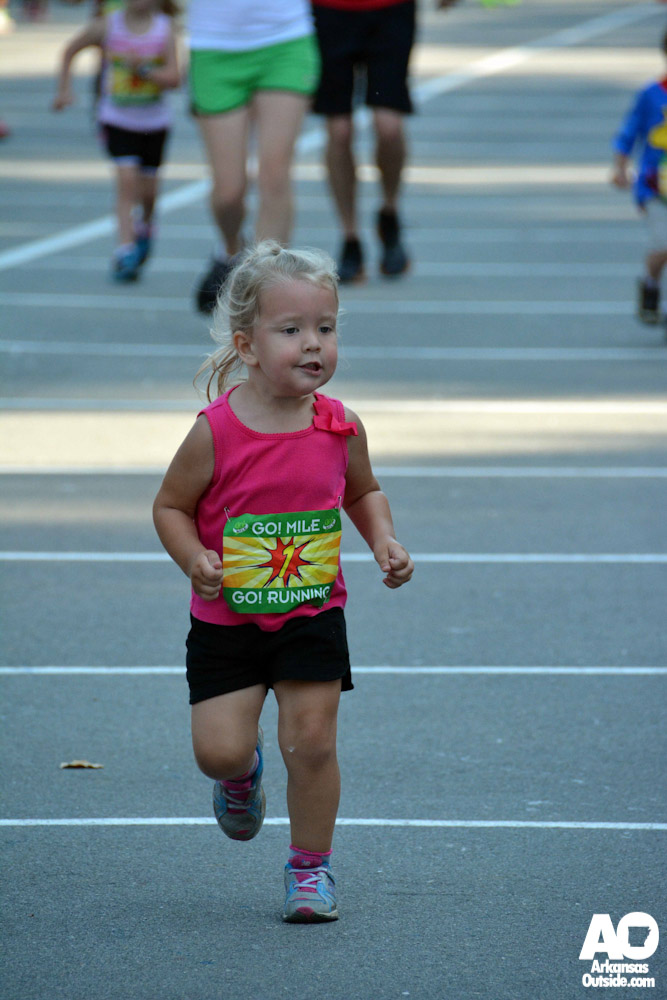 Saturday morning we witnessed many people in various stages of the thousand mile journey, including some who were taking that first step. The Go! Mile, in it’s third year, is an event for everyone. We saw kids, barely beyond their first steps in life to folks in their seventh or eighth decade of running. There were people who strolled through the mile long course and elite runners pushing record times.

The venue was Burns Park, starting in one of the parking lots in the center of the soccer complex, runners headed out under the cottonwood trees to circle the area clockwise before coming into the shaded finish line. Music was playing from the speakers of race timing specialist Mac’s Race Timing and repeating his role as master of ceremonies Jeff Matthews was on hand as people lined the finish chute cheering and clapping.

Many running events tend to be about getting from point A to point B as fast as possible and then being done with the event. Runners might leave immediately after finishing the race or maybe stick around for food and chatting but the event is over when the race itself is over. The Go! Mile is different, the brainchild of Gary and Erin Taylor of Go! Running, this race keeps the participants involved in the races of their friends and family. With the races starting in seven different heats separated by age and gender, family and friends who would normally be running at the same time, are able to watch and cheer for each other before or after their own race.

The first heat is called the First Mile, it’s a great way to kick off the event.  It is designed to encourage people who don’t run on a regular basis or have never run a race to try it out. It’s the First Mile of the rest of your running career, what a great way to be introduced to running. Ninety-eight people toed the line for their first mile,  young and old, kids that took off at a sprint on the front and others who found a good comfortable pace out of the gate to enjoy a walk/jog/run in the park that morning.

Results for the First Mile.

Fifteen minutes after the First Mile started, the women’s 39 and under group took off. One hundred fourteen women crossed the line, many hoping to set new personal bests. Ginea Qualls, one of our interviewees, finished a respectable 29th place overall and 9th in her age group. Mary Muldrow of Little Rock picked up first place with a time of 6:10.63.

Results for women 39 and under.

Next up were the 39 and under men. We were a little more involved in this heat since my son David was running his first mile. He normally runs longer distances but wanted to see what he could do in a sprint. He finished up 19th overall in the 87 person field and 3rd in his age group at 5:43. Not too shabby. Regular runners should be reminded that knowing your time on an official mile course helps to improve your overall running giving you mile split goals on longer runs. First place in this heat went to  twenty year old, DJ Tully of Little Rock with a time of 5:10.66.

Results for men 39 and under.

The 40+ women were up next. This was a strong group with 66 runners. Cymber Gieringer of Pine Bluff took first with a very solid 6:26.70. The age range for this group topped out with a woman from North Little Rock at 79 years young.

Results for women 40 and over.

It was about 8:30 when the 40+ Men set off. Another interviewee, Joe Milligan kept his Grand Prix Series streak going with a 58th place finish in the 88 person field. This group also included the oldest person competing in the Go! Mile this year, 81 year old Marvin Engels from Texarkana who kept it just under 9 minutes. The overall winner was John Thrash of White Hall with a 5:12.46.

Results for men 40 and over.

Next up were the 58 elite runners who showed up to participate in this RRCA Southern Region One Mile Championship Race.  Included in this heat were Arkansas Outside Interviewees Ron Mitchell, Tracy Tungac and Tim Richard. Ron took 3rd in the masters division, Tracy was the first women to cross the line and Tim took 3rd in his age group and 9th overall. The overall race winner was Daniel Kirwa of Searcy with a finish time of 4:19.24.

The final heat of the day is the Kids Mini-Mile, a shorter course that gives all the kids in attendance a chance to participate and run across the finish line.

The morning finished up with a short awards ceremony and a lot of hanging around talking and enjoying the local running community. We hope to see you out there next year but don’t wait until then to run your first mile, you can do it this week.

We have a lot of photos and we’ll be releasing them by heat all day on our Facebook Page. We’ll also update this page with a link when each one is loaded, so check back.

Women’s 39 and Under Photos

Men’s 39 and Under Photos

Women’s 40 and Over Photos

Men’s 40 and Over Photos

Podium and “The Scene” Photos