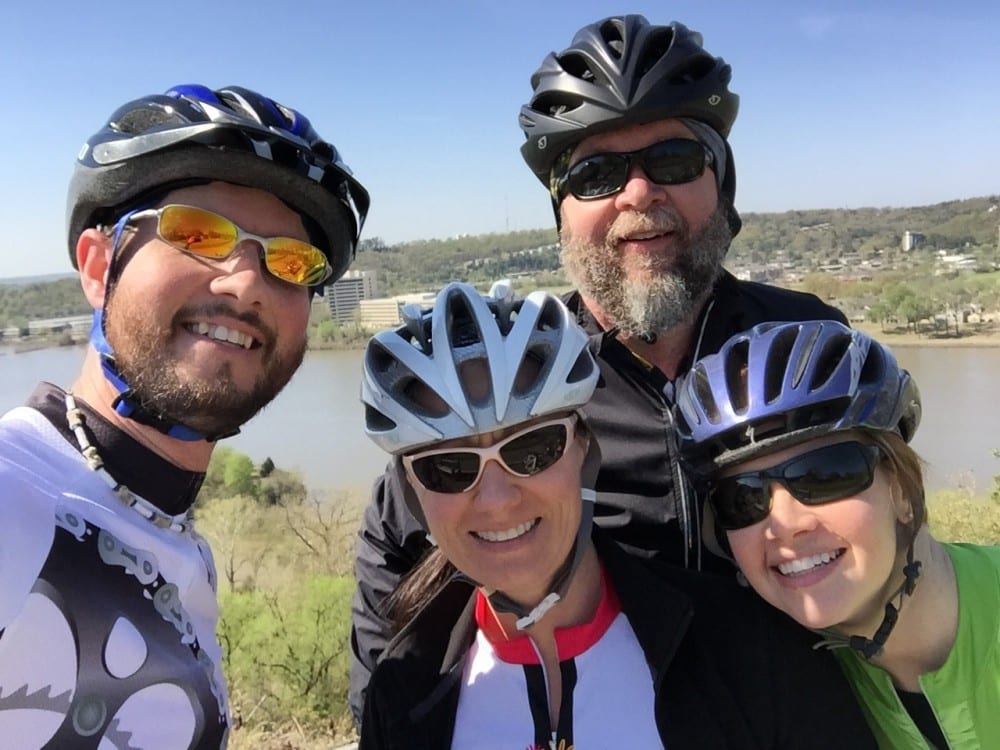 It’s All Fun and Games Until Someone Hits a Bollard

The first Saturday in April started unlike most Saturdays of the past three and half years, there was no 4:30 or 5:00 a.m. alarm. The car was not already packed with biking, running, or paddling gear. The cameras weren’t on the chargers and although there were several events that we could have attended or participated in, we decided to enjoy the day by cycling with friends.

Our foursome of riders met at the submarine in North Little Rock, one with her Mugs Cafe breakfast tacos still in the seat beside her and one coming straight from the Capital City 10K run. While we debated the cost/benefit analysis of wearing jackets on a day with temperatures predicted to rise well above 60 after a chilly morning, Tina finished her tacos and off we rode. An easy pedal west on the River Trail soon had us at our first test of the day- the climb up Ft. Roots. It would be the very first Ft. Roots climb for one of us, an introduction to the training foundation for many new cyclists. The view from the top is always worth a quick stop and a photo-op.

Back on the River Trail we enjoyed an uneventful trip toward the Big Dam Bridge. Having already discussed the likelihood that the bridge would be crowded, we knew we’d be taking it easy. Taking the downside of the east ramp and riding the brakes, our single file line was closing in on the bottom of the ramp. First in line called out to two runners side by side at the bottom and adjusted to the far left of the bollards. Second in line was dinging a bell and as one of the runners finally heard that something was going on, she went to take her earbud out and stepped out into the path with the second cyclist crashing head on into one of the bollards, the third riding straight over her back wheel, lucky to stay upright, and the fourth screeching to a halt and promptly falling over too. The runner turned long enough to ask “are you okay?” and then went on her way. Tina’s carbon fork was cracked, all the way around. She was bruised, but had no immediately detectable injuries. She was lucky. The moral of the story is, be aware. Luckily we were not going full speed and the cyclist didn’t hit the runner or hit the bollard at an angle that caused more significant injuries. Please, if you have to have music in your ears on the trail, don’t wear both buds and make sure you can hear bells and people letting you know they’re behind you, especially if you’re running two or three abreast. That goes double for cyclists, it only takes a second to ruin someone’s day, including your own, be sure to give advance warning and take it easy on these crowded warm spring days. With a cracked fork and the adrenaline rush of the accident, she decided to slow roll back to her car alone. We stood and debated for a good five minutes if we should go after her. She was insistent that she was mostly upset about the fork and I know when I have things like that happen, I want to deal with the demons in my head alone, so we let her go.

And then there were three. We continued on over the Two Rivers Bridge, still taking it easier than we would on a cold day when there are fewer people out walking on the trail. We rode to the new Pinnacle Valley Restaurant because we heard the new eatery was cyclist friendly. We parked our bikes at the bike race and walked in. The staff that met us at the door asked if we’d like to sit outside, which of course we did, the day was too gorgeous to be indoors. Noting the chalkboard of specials that included some incredible happy hour deals on domestic beer from 3-6 p.m., we walked outside to the large sunny patio the sits in the L-shaped building, protected from the traffic of Pinnacle Valley Road with a limited view of the light vehicular and heavy cycling traffic on Beck Road. A brief discussion about the mission of the restaurant led to a lengthy conversation with co-owner Gina. As has been mentioned lately on social media, the restaurant does indeed want to encourage cyclists to stop in. While the dinner entree menu of rib-eye or rainbow trout might be heavy unless it’s the end of the ride, they also serve a variety of appetizers, salads, and sandwiches. They have a fairly extensive wine and beer list with some local beer on tap. Greg ran the Capital City 10K in the morning and we were close to 20 miles into our ride, he needed sustenance. While we all enjoyed a refreshing locally crafted beverage, Greg eagerly consumed a sandwich which he assured us tasted as good as it looked. Owner Gina and her husband live close to the restaurant, very close. They shared some of their plans for building a great community asset with the restaurant by serving the folks that are long term campers at Maumelle Park while receiving treatment at local hospitals. There is a need for food service close to the park for those who may not be up to traveling very far, or those who need a place close by to get take out. They are in the process of building another structure on the property that will house other needed services and hinted that one service they would like to see is a bike shop or at least a bike repair facility. Next time you’re riding by, take a break, have a beverage or something to nibble on, and let them know we appreciate businesses willing to welcome our sweaty spandex and bike cleats.

On our way back there were even more folks on the trail appreciating the warm spring sunshine; kids learning to ride, parents with strollers, and families entertaining visitors for Easter weekend, showing off the natural state. There were waves and shouts of “Hey” and mostly “Hey JOE because the beard is unmistakable, and CARVE rider George Rhode even found a place to turn around and catch back up to us just to say hi. At the bottom of the North Little Rock side of the Big Dam Bridge, we noticed a large yellow and blue stand that said Alex’s Lemonade. There was a bike loaded with panniers leaning against it and a young lady hawking free lemonade. We stopped and asked for the story behind Alex’s Lemonade Stand and Ken’s 10,000 mile Ride for Childhood Cancer. Ken is a cancer survivor himself and is logging his 10th cross-country fundraising trip. If you missed seeing him at the bridge Saturday, you can still donate through his website. Follow him on twitter and help spread the word.

Between Ken’s mission to do his part for childhood cancer research and Pinnacle Valley Restaurant’s idea of serving their community not just with food, but with a hearty welcome to all who pass by or those just passing through, the ride needed just one more thing to make my heart happy. I called Tina to make sure she was still okay now that the adrenaline had time to wear off. When she responded with “meet me at Creegan’s” I figured the day turned out just fine after all.