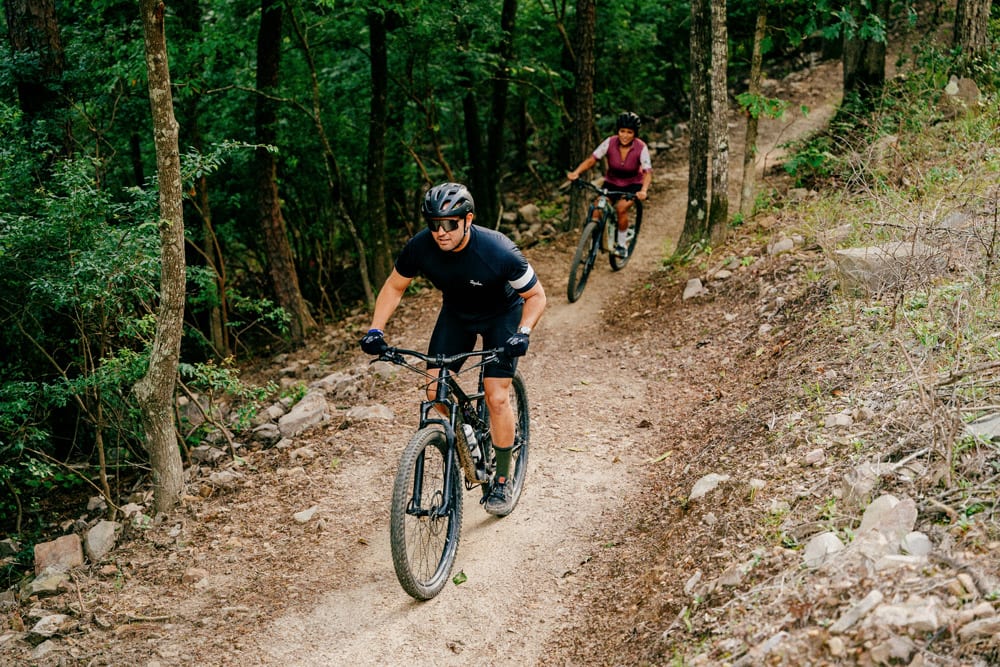 Little Rock, Ark. (June 17, 2021) – Today residents of Central Arkansas celebrated the establishment of a new mountain bike trail system at the City of Little Rock’s River Mountain Park and Two Rivers Park that will cater to riders of all ages and skill levels. This Saturday, June 19, the public is invited to a family-friendly community party in the park to celebrate the new addition to the region and enjoy outdoor fun, food trucks, vendors, and giveaways for the whole family. The trails at River Mountain Park officially opened today, and a secondary Gateway trail and a children’s bike skills area at Two Rivers Park are soon to open later this month.

During today’s dedication event, the City of Little Rock, the Arkansas Parks & Recreation Foundation, the Walton Family Foundation, and city leaders announced the opening of these new recreational amenities.

“Our parks and outdoor recreation are some of Little Rock’s best attributes,” said Little Rock Mayor Frank Scott, Jr. “These efforts not only increase the quality of life in the region but also show committed coordination from multiple organizations to make projects like this a reality for our community and those who visit.”

Little Rock’s new mountain bike park at River Mountain Park is also the city’s first, featuring 10 miles of trails with varying degrees of difficulty for beginners through experts. The new Gateway trail and bike skills area are specifically for new riders and children. It will sit across the river at Two Rivers Park and is accessible via the Two Rivers Park Pedestrian and Bike Bridge over the Little Maumelle River. This new development is not only connected to other parts of Little Rock and North Little Rock, but also to Pinnacle Mountain State Park Monument Trails just outside of the city limits via a shared lane along Pinnacle Valley Road.

“Arkansas Parks & Recreation Foundation’s mission is to add value to places that provide exceptional recreation experiences. That mission is met through this project by activating two long-loved parks with a new recreational activity for people of all ages in the heart of two of Little Rock’s most beautiful parks,” said Suzanne Grobmyer, executive director of the Arkansas Parks & Recreation Foundation.

This dedication event follows the recent opening of the Monument Trails at Pinnacle Mountain State Park in Pulaski County. Work at all three parks is supported by $2.6 million in grants from the Walton Family Foundation to the Arkansas Parks & Recreation Foundation. This funding has produced world-class hiking, trail running, and mountain biking experiences for all to enjoy in Central Arkansas.

Construction began in January and all is complete except for the children’s sections at Two Rivers Park, which will open at the end of the month, weather permitting. The goal of the partnership was to develop trails to allow for balance bikes to expert level riders to have enjoyable rides and for families to enjoy being outdoors together.

The trails represent the first machine-built system in the city of Little Rock’s parks, are built by Rock Solid Trail Contracting, and are located off the River Trail in one of Little Rock’s most scenic parks along the Arkansas River. The positioning along the Arkansas River allows visitors to also enjoy kayaking and other water sports in the area.

See also  Where It All Started

“Our expansive trails system has long been a tremendous asset to recruit visitors to Central Arkansas and played a key role in the quality of life for our residents. These new trails give us a world-class mountain biking element to add to our cycling portfolio,” said Gretchen Hall, president, and CEO of the Little Rock Convention and Visitors Bureau. “We want Little Rock to be seen as a must-do destination for those who love the outdoors, cycling, and mountain biking, and we know these new additions will play a key role in achieving that.”

Little Rock also has plans for trail work at Boyle Park, Allsopp Park North, and Western Hills Park as well as a plan to connect seven of the city’s parks via the Tri-Creek Greenway, an off-street bicycle, and pedestrian corridor.

The new trails dedicated today, except for those at Two Rivers Park which will open on a later date, are now open for the public to explore and enjoy. Central Arkansans and visitors alike are invited to celebrate these new amenities at a “party in the park” this Saturday, June 19, from 10 a.m. to 2 p.m. at River Mountain Park next to the Little Maumelle River Boat Launch (nearby parking off River Mountain Road).