First Up: Rock Climbing Documentary “The 24” on June 10 in Bentonville

BENTONVILLE – Arkansas Cinema Society (ACS) returns to Thaden School in Bentonville on Friday, June 10th for an Arkansas Filmmaker Spotlight on Fort Smith documentarian Clay Pruitt with a special presentation of his film, The 24, about the 24 Hours of Horseshoe Hell endurance rock climbing competition that takes place annually in Jasper.

This event is sponsored by Bentonville-based outdoor clothing company LIVSN Designs. The 24 is the first screening in a series of outdoor and adventure films presented by ACS and LIVSN with more to come throughout the year.

On June 10, doors open for a happy hour mixer with complimentary beverages at 6 p.m. The film starts at 7 p.m. followed by a Q+A with the filmmaker.

Admission is free but registration will be required. Get tickets here. 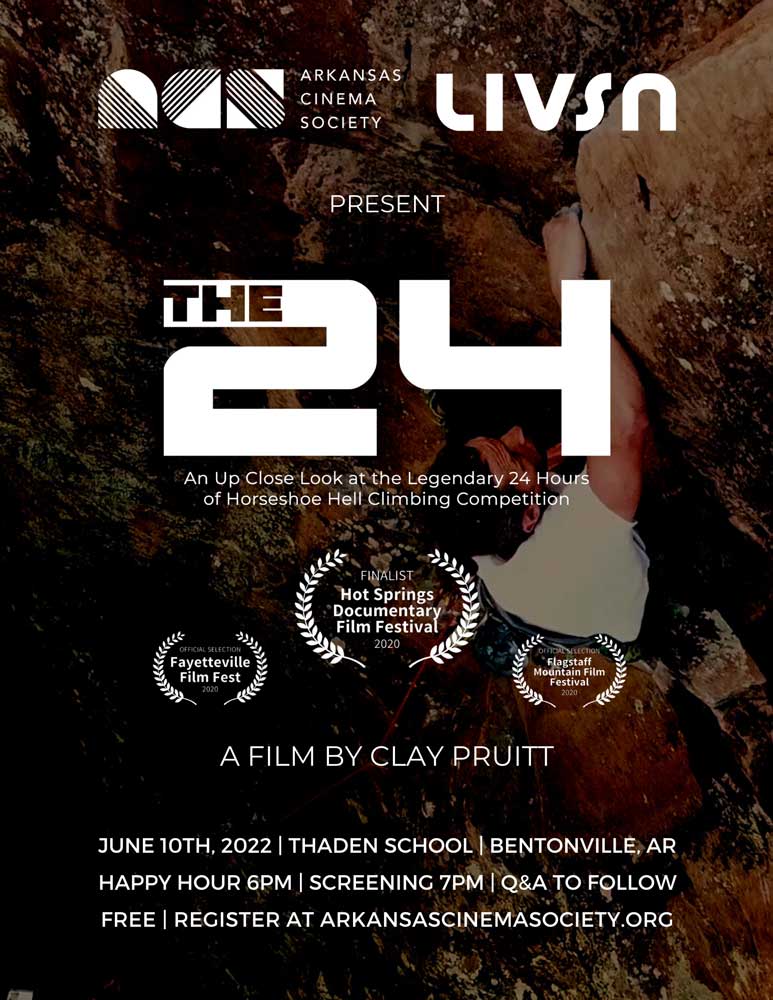 ACS Executive Director Kathryn Tucker is excited to explore this genre of filmmaking.

“Our goal at ACS is to grow and promote filmmaking in the Natural State and it wouldn’t be right to do it without including all the incredible outdoor and adventure films that take place in our state and beyond,” she said. “Kicking this off with Clay Pruitt’s film The 24 is the best way to do it. Clay is a fantastic filmmaker and all-around great guy. We are grateful to have a partner in LIVSN Designs, whose foundation is rooted in the development of lifelong outdoor enthusiasts here. We plan to continue screening more outdoor and recreation films in the future.”

LIVSN Brand Marketing Manager Kelsey Ferguson is an avid fan of both film and the outdoors, and she’s thrilled to bring these passions together.

“Our region continues to invest in building the outdoor recreation sector, so cultivating a community that seeks out and supports outdoor and adventure-focused filmmakers is of paramount importance,” she said.

About The 24
​Once a year climbers from all over the world come together at Horseshoe Canyon Ranch in Jasper, Arkansas, to test their endurance in the world’s only 24-hour rock climbing competition. The official name of the event is “The 24 Hours of Horseshoe Hell,” but the contestants just call it…”Hell.”

About Clay Pruitt
​Clay Pruitt was born and raised in Arkansas and always had a passion for film. After receiving a bachelor’s degree in Business from the University of Arkansas, he pursued his passion and obtained a second college degree from the Academy of Arts University in San Francisco. ​ Upon graduating, he moved his career back to Arkansas where he continued to pursue film. Today, he works with 5 Star Productions out of Fort Smith and serves as the program director for the Fort Smith International Film Festival.