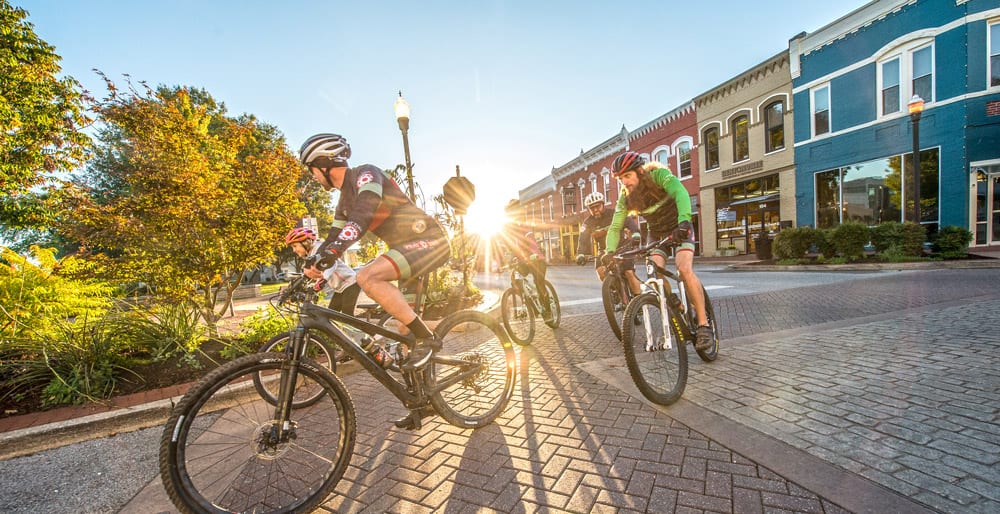 National and state leadership gear-up for cycling summit in Bentonville

Event aims for Arkansas to become the most bicycle-conscious state in the U.S.

BENTONVILLE, ARK. (May 24, 2021) – Arkansas has become one of the most popular locations in the United States for people who love to ride bicycles. Regional investments in biking infrastructure and the increased demand for outdoor recreation during the COVID-19 pandemic have driven a surge in bike riding. With more bicycles on the road, safety is a top community priority. That will be the topic of conversation at this month’s Safe Roads Summit, a day-long gathering hosted by the Arkansas Good Roads Foundation.

The Safe Roads Summit will be one of the largest policy-focused bike events in Arkansas this year. Joe Quinn, executive director of the Arkansas Good Roads Foundation, says that bringing together community stakeholders to focus solely on bicycle safety is critical to raising awareness, educating the community, and creating good policy.

“Riding safely and helping educate drivers on how to safely interact with bikers must be a key part of any transportation or infrastructure discussion,” said Quinn. “Arkansas Good Roads is committed to advancing that discussion and ensuring safer roads for everyone.”

Last summer’s upsurge in cycling coupled with recent Arkansas legislation prompted Arkansas Good Roads Foundation to launch the Good Roads are Safe Roads campaign, an effort to educate motorists and people commuting by bicycle about two rules signed into law in 2019. The laws allow bicycle riders to treat a red light like a stop sign and a stop sign like a yield sign when there is no oncoming traffic. The campaign was funded through a grant from the Walton Family Foundation.

The campaign and law have attracted national attention from organizations like Bike Law, a network of independent bicycle crash attorneys that pursue cycling justice across the country. Rachael Maney, an avid cyclist, and passionate advocate serves as the national director. She will deliver a keynote address at the Safe Roads Summit.

“With the investment in cycling infrastructure, public-private partnerships, and important cycling-forward laws, Arkansas is poised to become the most bike-conscious state in the United States,” said Maney. “We feel that there is a real opportunity for others around the country to model what’s happening here.”

Well-integrated biking communities also lead to economic growth, a point noted by businesses looking to relocate or expand in the state. It is also true for legacy businesses such as Bentonville-based Walmart. In 2019, the company announced plans to build a bike-friendly new home office campus and set a goal for 10 percent of Home Office associates in Bentonville to commute to work using bicycles and other alternative modes of transportation.

“Walmart is designing our new campus to facilitate transportation choices that are healthier, reduce traffic and parking strains, and support the well-being of the greater community,” said Joe Allbright, senior director of corporate real estate at Walmart. “Multi-modal and alternative transportation are the future of commuting, and we hope our new campus becomes a catalyst for behavior change.”

Mike Preston, Arkansas secretary of commerce and executive director of the Arkansas Economic Development Commission, works to attract companies to locate or expand in Arkansas. He says prioritizing safer roadways through infrastructure investment and cycling-friendly legislation are good for business.

“Roads that are safe for bicycles, vehicles, and pedestrians alike are an attractive quality for a state,” Preston said. “This safety doesn’t always precipitate from the physicality of the roads themselves though. This can also be related to the laws a state has enacted to protect its people when they are using the roads.”

Beyond corporate investment, safer roads and cycling-friendly communities are also a boon to tourism.

Cyclists who travel to Arkansas spend money on lodging, food, gas, vehicle rental, cycling equipment and tune-ups, visits to museums, and much more.

“Cycling is a major form of recreation in Arkansas, and increasing numbers of cyclists are traveling to our state to experience the world-class bike trails we have to offer,” said Stacy Hurst, secretary of the Arkansas Department of Parks, Heritage and Tourism. “Investing in the safety of our roads for cyclists and others can only make Arkansas more attractive in this aspect.”

The Arkansas Good Roads Foundation Safe Roads Summit will take place on May 27 at Thaden Fieldhouse located at the Bentonville Municipal Airport, 2205 SW I Street, Bentonville, Arkansas.  The event will feature keynote presentations, panel discussions, and a performance by All Bikes All Day NWA. Media are invited to attend with advance notice. View the full agenda here.