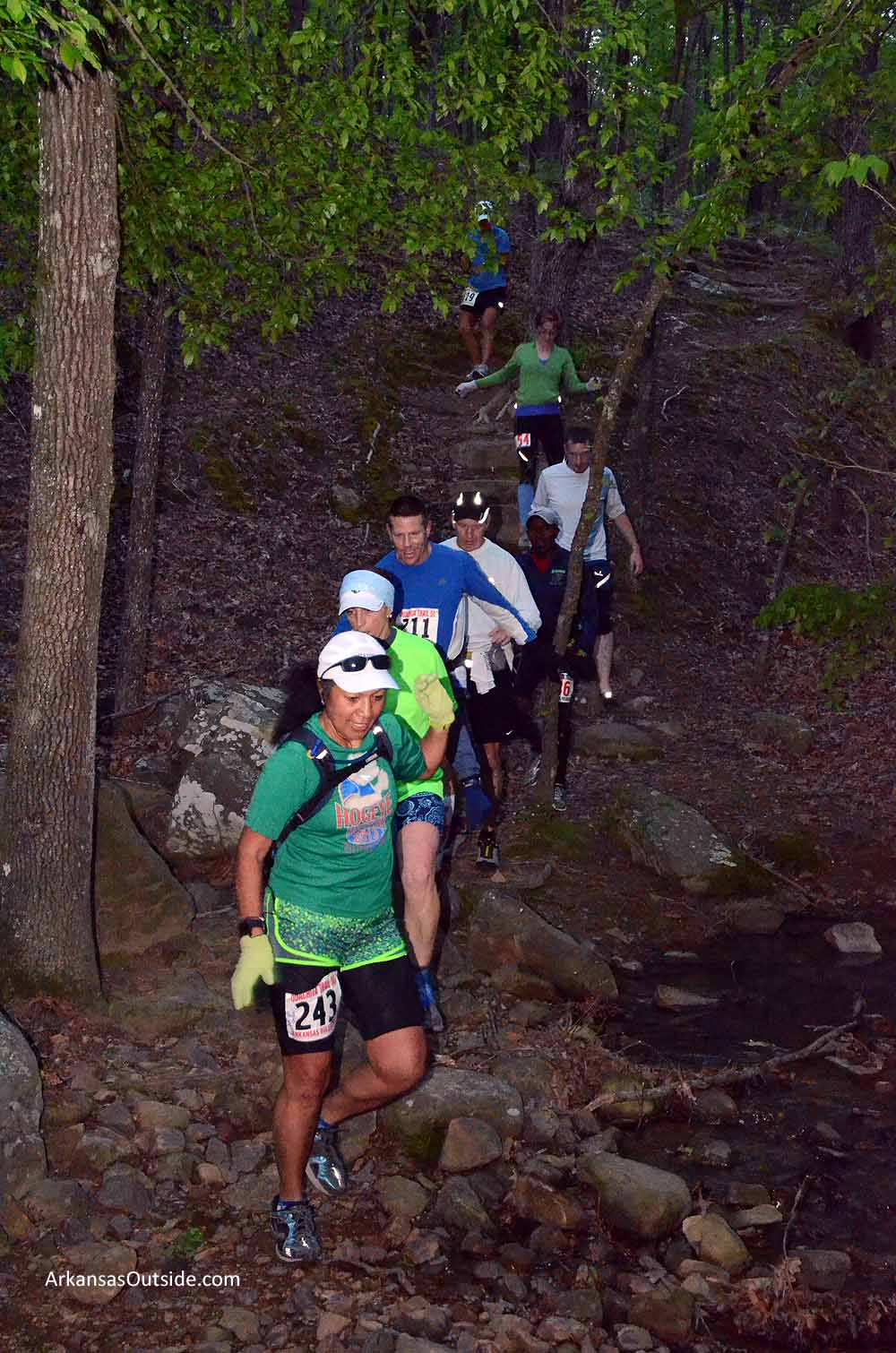 In the early morning darkness, the flashlights and headlamps bobbing through the parking lot, a hundred and fifty odd runners plus their support teams, families and friends milled about collecting race bags and bib numbers and waiting for Race Director and Queen of all things Ouachita 50 Chrissy Ferguson, to give her expletive punctuated pre-race instructions. Basically, stay on the trail, watch for blue blazes and ribbon, if you’re bushwhacking you’re lost and DON’T poop on the trail. So I guess that was stay on the trail, unless you have to poop. In short order, the GO! was given and the lights bobbed out along the short stretch of pavement along Pinnacle Valley Road that would get runners from the Maumelle Pavilion to the trail head of the Ouachita Trail. Joe was lying in wait with his camera ready to capture the happy faces at the bottom of the steep steps that mark the start (and end) of the trail section of the race.

Soon the flat trail would give way again to the steep uphill section of the East Summit and then to the even steeper rock scramble to the top of Pinnacle Mountain. Many runners, including myself, consider this a favorite part of the course. This is our backyard, our outdoor gym, our playground and we love it. Some runners, especially those from out of town, seem to feel differently about our  rocky pinnacle as they pause to catch their breath at the top. Many then realize that they are getting the most spectacular view of the day.

Whether they were going for 30 or 50 miles,  runners were treated to a trail interspersed with mud holes, rock gardens,  gnarly roots, flowing creeks, and undulating hills. The trail follows the bank on the North side of Lake Maumelle and every so often, the trail gets close enough for a good view of the lake and the Ouachita Mountain Range.  I was running with AO contributing writer, dreadlocked god, and all around nice guy Nicholas Norfolk on the slower end of the pack. We had the chance to see a lot of the other 50Km runners after they made the halfway turn around. We heard  “Good Job” and “Looking good, keep it up!” over and over. I love the encouragement runners give each other during these long events. Second place female finisher and AO contributor Jen Freilino even stopped long enough to give me a quick hug and words of encouragement before moving on down the trail.

Aid stations were placed about 4 miles apart along the trail, plus the Hashers had a spot about 1.9 miles before the Northshore 50K turnaround spot and 1.7 miles before the 50M course split from the 50K. I could go on forever about the aid stations. Everyone was so helpful. The Hashers offered beer and flat soda as well as red bull and V8 drinks. I even got some endurolyte tablets from them on the return leg, much appreciated! Hashers know how to make everyone feel good. On On.

Every station was well stocked with salty and sweet goodies that could be easily and quickly grabbed from bowls. At the Northshore station I got Haribo gummy bears and Stacy Shaver’s homemade chocolate chip cookies as well as a good pat on the back from cheerleader James McManners. Nicholas and I were definitely playing grab and go at the stations but stopped at Northshore for a photo op.  At the middle station we were greeted by one of the Harrington brothers who wasn’t running. Tim Harrington was out on the 50 mile course, training for his trip to the Western States 100. That station is also where I deliriously hugged Lou Peyton for her homemade strawberry cake. It tasted so good and made me feel like I could get through that final 8 miles with no problem. It’s also where Nicholas and I caught up with beautiful Elizabeth Quinn of the pink hair and lovely attitude.

The Northshore folks also decorated their part of the trail with a little Pirate themed fun. We started seeing signs like Ahoy Matey and finding little Jolly Rogers hanging in the trees to mark our path. I understand the 50 milers even had to Walk the Plank.

See also  Where Do We Run?

I would be remiss if I didn’t thank the all the volunteers, especially race director Chrissy Ferguson who has more fun than should be allowed.  A personal thanks going out to Kristen Sterba and Lisa Nicholls for taking care of each other and to Nicholas for being my motivator for 20 miles of fun in the muck. Wishes for a speedy recovery go to my  running partner Ashley Ederington who was injured shortly into the race and had to drop. And to John Bruno all the way from South Carolina who gave me a “Tag, you’re it!” as he passed me on the final mile of road to finish the 50 miler in 2nd place and gave me the push and the laugh I needed to keep jogging to my own 78th place finish.

Finishers received a handmade medal but had a choice between backwards and forwards. Seems that about half of the medals were reversed putting Mississippi on the wrong side of the river. When asked if they liked it frontwards or backwards by race organizer, Chrissy, most seemed a bit confused before eventually proclaiming their preference. (I heard a lot of requests for backwards.)

A more personal story is available at Frenetic Fitness.