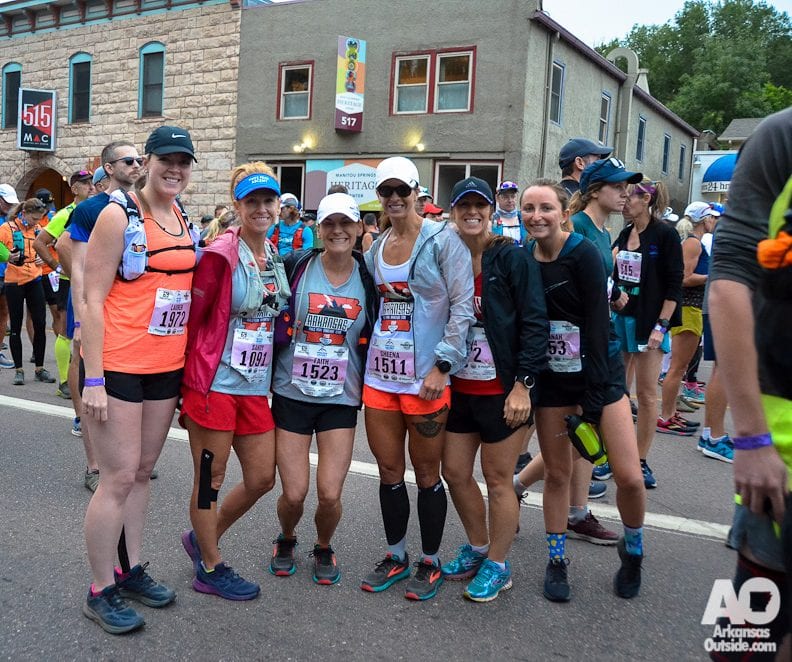 Arkansans once again invaded Manitou Springs, Colorado for the Pikes Peak Marathon and Ascent weekend. Arkies have been heading west to participate in the grueling race since 1984. Some, like Bill Coffelt and the Wears, Chris and Jonathon, love the race so much that they come back year after year. A few are going for that medal for the second or third time, having missed a time cut -off or like last year, having been turned back by bad weather. Runners afflicted with an intense need for the agony and ecstasy of events like Pikes Peak prefer to condense the effort and do both the ascent and the marathon in the same weekend. The race organizers refer to them as doublers. Others might have a different name for that special kind of determination.

The 13.1-mile course starts in downtown Manitou Springs curving through the streets before hitting the trail and finishes at the 14,115-foot summit of Pikes Peak climbing 7,815 feet. The joke is that it’s only one hill, just one. While I was waiting for my Arkansas people to finish the race, another spectator asked me how flatlanders train? It gave me a chance to explain the hills and hollers of Arkansas, and that humidity is not a great substitute for elevation training, but nothing else comes as close to that feeling of an elephant on your chest.

There was a wild ride in the press vehicle leading out the race start. Joe Gray caught up to the truck and the driver had to be compelled to “GO! GO!” Joe has an impressive resume including 7 Gold Medal wins in the USA Mountain Running Championships. He has a winning 2:05:28 time at 2016 Pikes Peak Ascent and the Fastest Known Time on the Manitou Incline, 17:45. Any Arkansas Pikes Peaker who’s gone out early or stayed late to test themselves on the incline knows the lung-leg burn of the incline.

Winning times for the Ascent:

After the race, Joe Gray took to Twitter to claim “all my chips” Joseph Gray‏ @joegeezi Why are people saying I ran 2:09? I frickin ran 2:08:59! I want every second, “I want all my chips with the dip” (@Drake voice) @PikesPeakSports @csgazette @iRunFar #pikespeakascent

Races, especially long ones, are impossible without a massive crew of volunteers.

Cheerleaders can be a big boost for a tired runner. These folks went for it with a whole Baby Shark theme and sing a long.

Here are our Arkansas Pikes Peak Marathon Team running up the last bit of pavement on a steep hill before they get to put tread to dirt for ~12 more miles.

Photos from the ascent can be found on our Facebook Page.