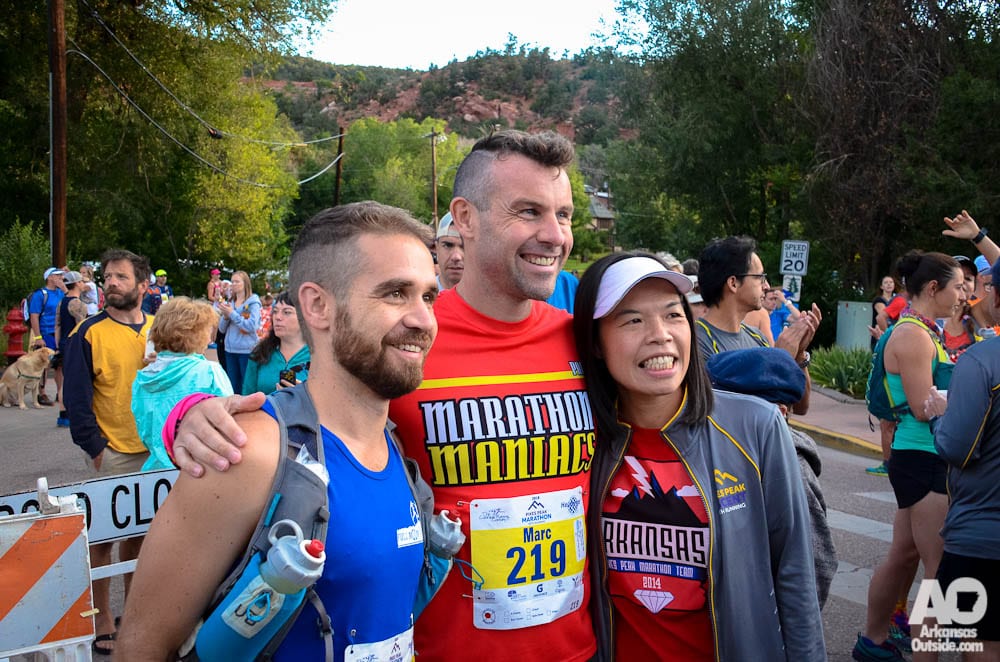 On Saturday, my day was peppered with people along the trail, some of whom were long time friends, some new acquaintances and some complete strangers who cheered, rallied, cajoled and pushed me throughout my journey to the top. On Sunday, it was my turn to get to do that for others. As we walked down the street toward the starting line, I remembered Susy’s words to me the day before- no need to work harder than you have to- so I paid the favor back and took Justin Cloar’s sweat bag from him. This would be Justin’s first Pikes Peak event and he was going for the Full Monty. It’s been a privilege to watch Justin’s running career flourish over the past few years. I remember when he first started showing up at trail races so it was an honor to carry his bag for him. At the starting line it was time for more “Good Luck!” and “Go Get ‘Em” before we  headed up the mountain by car to wait for runners at the turnaround. I got to enjoy the car ride up this time instead of by foot, the views are magnificent even out of a car window with the added benefit of being able to breathe and legs that did not feel like concrete.

Joe and I walked down to the spot where the team had been lying in wait the day before. And there we stayed, joined by another Joe who was his cousin’s only support for the day, watching, waiting, anticipating. When the first runner appeared, he had another runner right on his heels with a third not too far behind. Since we were below the turnaround, we got to watch as the summit order of Rickey Gates, Abu Diriba and Alex Nichols reversed as Alex began to close the gap and overtake both Abu and Rickey.

But let’s be honest, this is Arkansas Outside, we were waiting for the first glimpse of an Arkansas homie. We didn’t have to wait too long; just more than three and half hours after the start I heard Lance Biggers’ voice below me thanking volunteers, imploring downhill runners to go by him and cheering them down the path and asking for Cheez-Its and oxygen. Obviously he wasn’t in much distress since he was talking, yelling really, and looking oh so strong. He kept his lead and was the first Arkansan to finish and the only one with a sub-six-hour run at 5:57. Just behind him to the summit were Jason Abernathy, Jeffrey Grove, Marc Gill and John Krillenberger. I had the pleasure of sharing the ride down the mountain with John after my run on Saturday. John has run 6 out of the last 10 Pikes Peak weekends with 4 ascents, 2 marathons and 1 double under his belt. When I asked “What brings you back?” his answer kind of surprised me. It wasn’t about the challenge, or besting a time. The answer was “To be able to remember the details, to see things I might have missed.” That’s true trail love.

JT Patillo, Brett Nguyen and Ronnie Daniel, all of whom were doubling, made the ascent look easy on what had to be tired legs having already battled the monster the day before. Then came Bill Coffelt. Bill has 42 Pikes Peaks runs over 32 years to his credit. Seriously, 31 Marathons, 11 Ascents, 11 Doubles, the man is a legend yet took the time on Saturday to continually update the Arkansas Pikes Peak Marathon Team facebook page with the progress of the team after he finished his own run. Several more Arkansas runners came through, we tried to recognize and cheer for all of them.

Zac Henson ran by looking good on his way up. Soon, I was looking for Justin, it was near the time I expected him to summit and he did not disappoint. Once again I got to return the gift given me the day before and high-five Justin on his way to a spectacular inaugural Pikes Peak Marathon. As sleet began to pelt us and the cameras, we decided to start back up to the summit and head to the finish line, hoping to catch those we missed at the summit. I wanted to be there when the *&^$%ers who talked me into this expedition finished. As many of us gathered along the street just before the finish line, the Arkansas folks got a fair share of celebration along the chute. We made it down in time to see Justin finish, and then those we missed at the summit began arriving- our friends and back to back doublers John Kelly and Lacey Kelley, teased by the announcer as they arrived together that they should hold hands or something, obliged him with clasped hands overhead as they finished their second long day on trail. Sweet Susy came in like a boss with bruises and blood from a fall. I was still waiting on two women I’d spent a lot of hours on trail with over the past couple of years; Leisa Wamsley and Mindy Simonson were both doing the marathon as their first Pikes Peak event because they are brave, strong, and possibly insane. Both made it in, running strong with high fives all around and possibly a few tears. To all our Arkansas runners from first timers to old timers, congratulations.