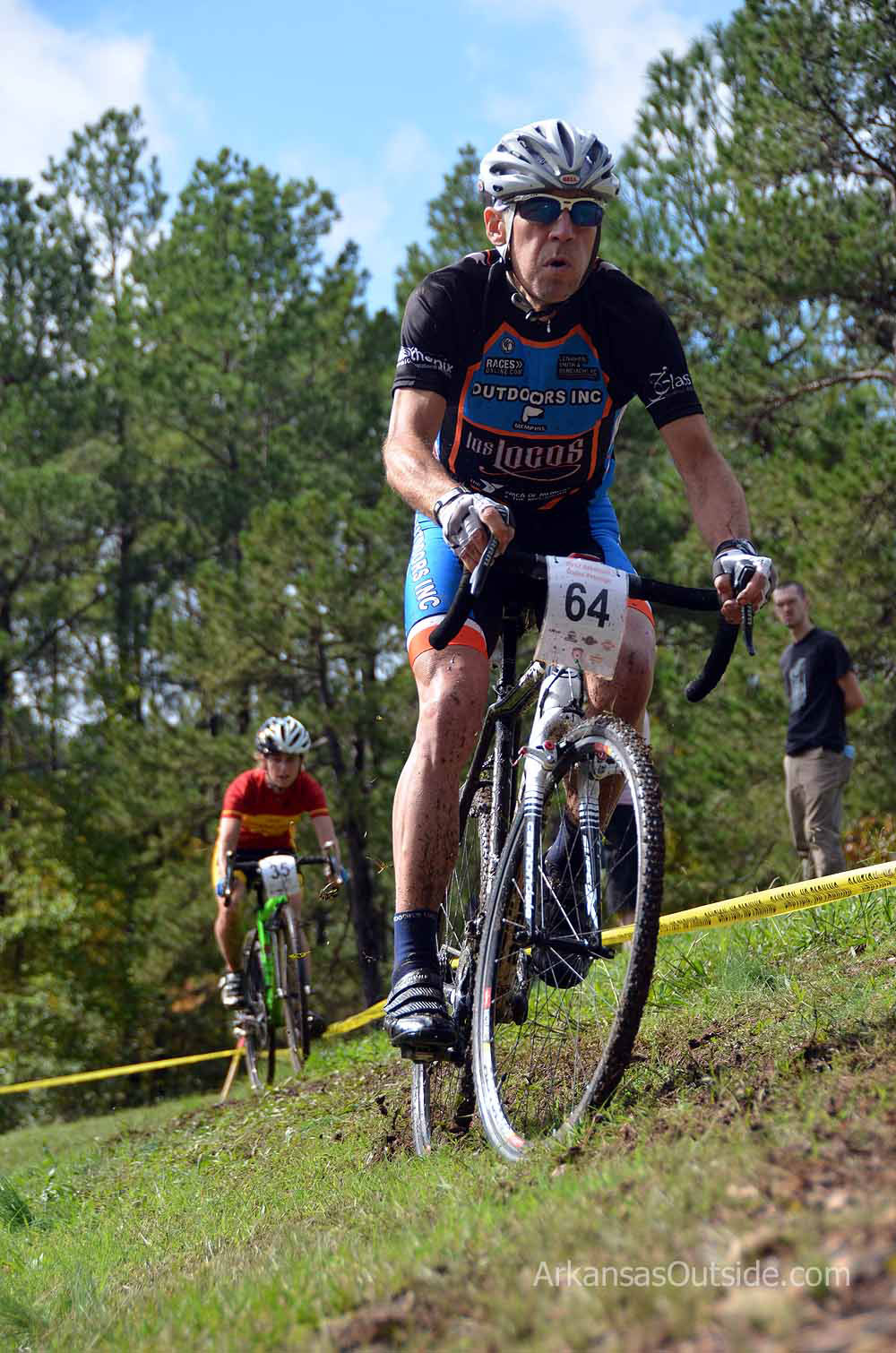 “I smell food,” said the leggy teen as she finished only her second cyclocross race ever. Her first was the previous night, this one was harder…and muddier.

When I woke up Sunday morning I took a look at the weather radar online and noticed a lot of rain was just leaving the area. Joy! That meant that the course planned for the days cyclocross race would be wet, the temperatures had also cooled. Outside the skies were still grey. This was cyclocross weather. There would be mud.

Reservoir Park is a beautiful little park just blocks from the Arkansas Outside headquarters (our house). Empty and quiet normally today would be different. The park has some tennis and basketball courts, a ball field, a pavilion, some paths, trails and a new disc golf course. Most of the park is covered in pine and oak trees, a small creek flows through it.

The Reservoir Cross hosted by The Community Bicyclist is the second in the Arkansas Super-Prestige Cyclocross Series. I was told the course was pretty fast when it was dry at set up, we would see how things turned out after the rain.

Starting at the pavilion the course quickly dropped East into the woods utilizing trails used for disc golf with quick muddy turns on rocks and roots.

After a short paved section riders then dropped down along a path leading toward the ball field to a tight u-turn into a very wet, muddy, grassy area. I saw a couple of slide outs here.

After crossing through a small creek the racers headed up a steep hill and at the top had to follow it off-camber for at least 50 yards before dropping back down into the woods for more twists and turns and roots.

Soon riders found themselves near the basketball and tennis courts winding their way from pavement to mud back to pavement and finally back in the mud where they then had a forced dismount up a hill with well placed landscape timbers.

A quick zig-zag down to the playground area where they were met by a couple of telephone pole barriers. Most dismounted and ran over these while a few showed off some mad cycling skills by staying on the bikes over them.

More mud and then the pavement climb back to the start…repeat. From the Strava posts I’ve seen the course was somewhere around 1.4 miles long. That’s a lot to pack into that short an area and all these obstacles had to be negotiated numerous times.

There were two races at the event. The first was the 40 minute ‘B’ race followed by the 50 minute ‘A’ race. Racers are trying to put in as many laps of the course as possible in the given time frame. Oh and the sun came out pretty quickly making it a beautiful day for spectating.

And first place in the ‘A’ race:

Many a tire was blown that day. You can see in the photo above that Gerald had to finish on his pit bike. Many top riders went out early due to multiple flats. My theory is that sliding sideways into the rocks is not good on tires. Such is cyclocross. The series now moves to Fayetteville for two races. The Highroller’s CX Adventure on November 3rd and De Pijp Smoke & Suds on the 4th.

Also, the young lady at the beginning of the article did find the food and at last count polished off 5 brats. Cyclocross will work up an appetite.