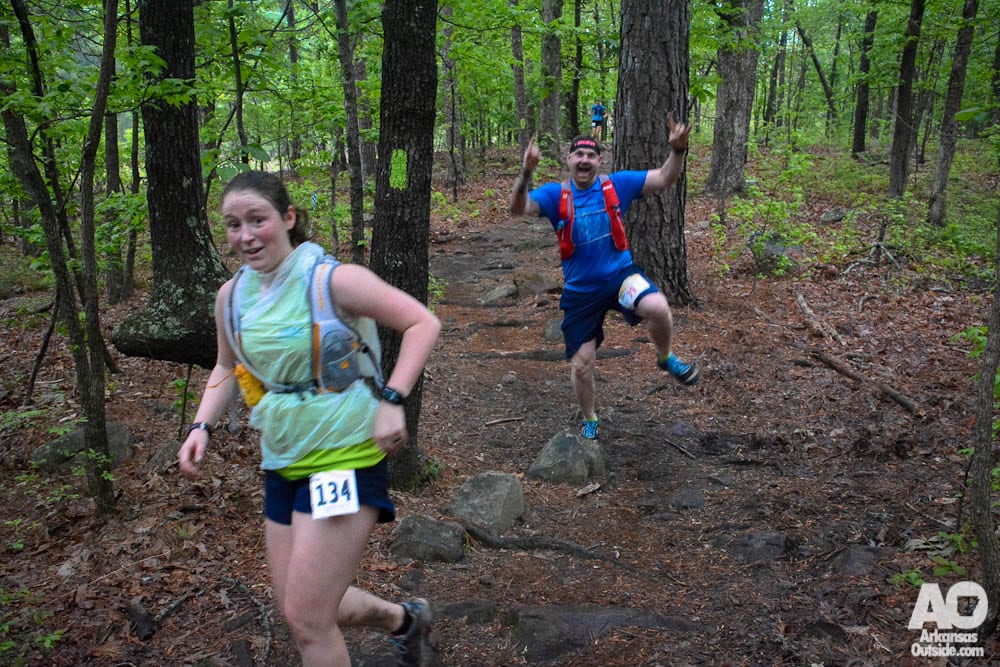 So Much for Weather Forecasts: OT50 Trail Run 2016

The 10 day forecast predicted a good chance of rain and warmer than normal temperatures for race day. As the week progressed, the forecast waffled, settling the night before the race on no rain and low 70’s. The forecast was wrong.  By 5:30 a.m. runners huddled under the pavilion hoping the drizzle would stop and they could start the race at least somewhat dry. It was not to be. With minutes to start time, the mist turned to light rain. Rain isn’t usually much of a deterrent for trail runs. But the Ouachita Trail 50K/50Mi starts with a trip up and over Pinnacle Mountain which can be tricky even in the driest of conditions and became an exercise in caution and balance on the rain slick rocks. I have a couple of good bruises to prove it.

I discovered that my newest favorite trail shoes, while still the most comfortable pair I’ve ever owned, do not grip well on wet rock. Normally the trip down the west side of Pinnacle is a breeze, but in the rain I found my feet slipping out from under me several times and a need to slow to a crawl. We were all in the same boat, the man in front of us decided that it would be prudent to turn around and crab crawl backwards rather than take another chance of slipping. The rain slowed to a mist and finally stopped completely about an hour and a half after the race started. With wet weather on and off all day Friday and Saturday’s early showers the trail was wet and muddy. On the typically muddy even in fair weather Spillway area, the brown muck plastered on shoes and became a sole sucking mess, each step met with a squelch. Luckily most of the 50K route was relatively dry considering the amount of rainfall. The 50 Mile route from Northshore to Hwy 10 always involves a few small creek crossings, wet shoes and socks are the norm, today runners would have to wade a little deeper.

My day was going almost to plan. I ran alone for much of the first half of the race after coming down Pinnacle, having Cyndra from Nacogdoches keep me company for a couple of miles early on was a welcome distraction. As she pulled away from me I started looking forward to the 14 mile mark where I knew I would find my friends and my husband for a shot of good vibes and energy. For me, getting to them was as important as hitting the halfway turnaround 2 miles beyond. I got hugs, kisses and high fives and help with adjusting my hydration pack that had loosened over the miles. As I neared the halfway station I got to see my training crew Stephanie, Katy and Tisha as they were heading out. Thoughts of trying to catch them were quickly dismissed as I knew I had a long way to go and blowing up was not an option. The volunteer crew at the turnaround took my hydration pack and filled it for me as I tried to consume some all important sugar, salt and calories. On my way out I ran into James who had been pacing his brother William through the first few miles. He promised he would catch me and by mile 21, he did. He stuck with me for another few miles if only to witness yet another fall on a slick rock and a few missteps. I think maybe I was too distracted. With single digit mileage left to the finish, I told him to kick it into gear and go without me while I tried to baby my aching knee from the fall just a bit. I spent the final 8 miles of the run chasing down a group of runners from Louisiana. Running with them reinforced my knowledge that I’m much better on the dirt, rocks, and roots than I am on the road. I stopped for a moment at the memorial for Jacob Wells. His absence is still felt by many.

As we hit the last pavement section on Pinnacle Valley Road I was lucky to have the Louisiana crew right in front of me, the sight of Britt ahead kept me moving as I realized I was very close to beating the 8 hour time mark. I crossed the line with less than 2 minutes before the clock clicked over to 8:00:00. It was a great finish for me, my best 50K time yet despite the falls, the walking, the stopping to talk to friends as we passed each other, the taking pictures, the “good luck you’re doing great” kisses from Joe at mile 14 and 18, all the little things that cost time on trail. As happy as I was and am about my own finish, some of the best thoughts on the day fall to my friends, my compadres, my training partners. There were phenomenal first time 50K and 50M finishes, a few PRs, and some runners who have enough finishes under their belts that they just went along for the ride to help others get to the line. As the clock ticked past 12 hours and then 12.5 hours, my eyes were on the road waiting for my frequent running partner, Tina. She was running her first 50 miler and has been working so hard. Her goal was 12.5 hours and after begging the radio crew for her latest check-in information, I knew she was close to her goal time. As she came through the gate I threw my hands in the air and screamed as loud as could, forgetting about the pain in my legs and feet as I jogged along in my flip flops with her to the finish where friends formed a receiving line of high fives, then surrounded her with hugs under the finish banner. And that, is what it’s all about.

Thanks to Race Director Extraordinaire Chrissy Ferguson and her amazing crew of volunteers. Thanks to the LRH3 for the super secret aid station, the beer, the hugs, and the “good game”. Let’s do it again soon. (More photos on our Facebook Page)