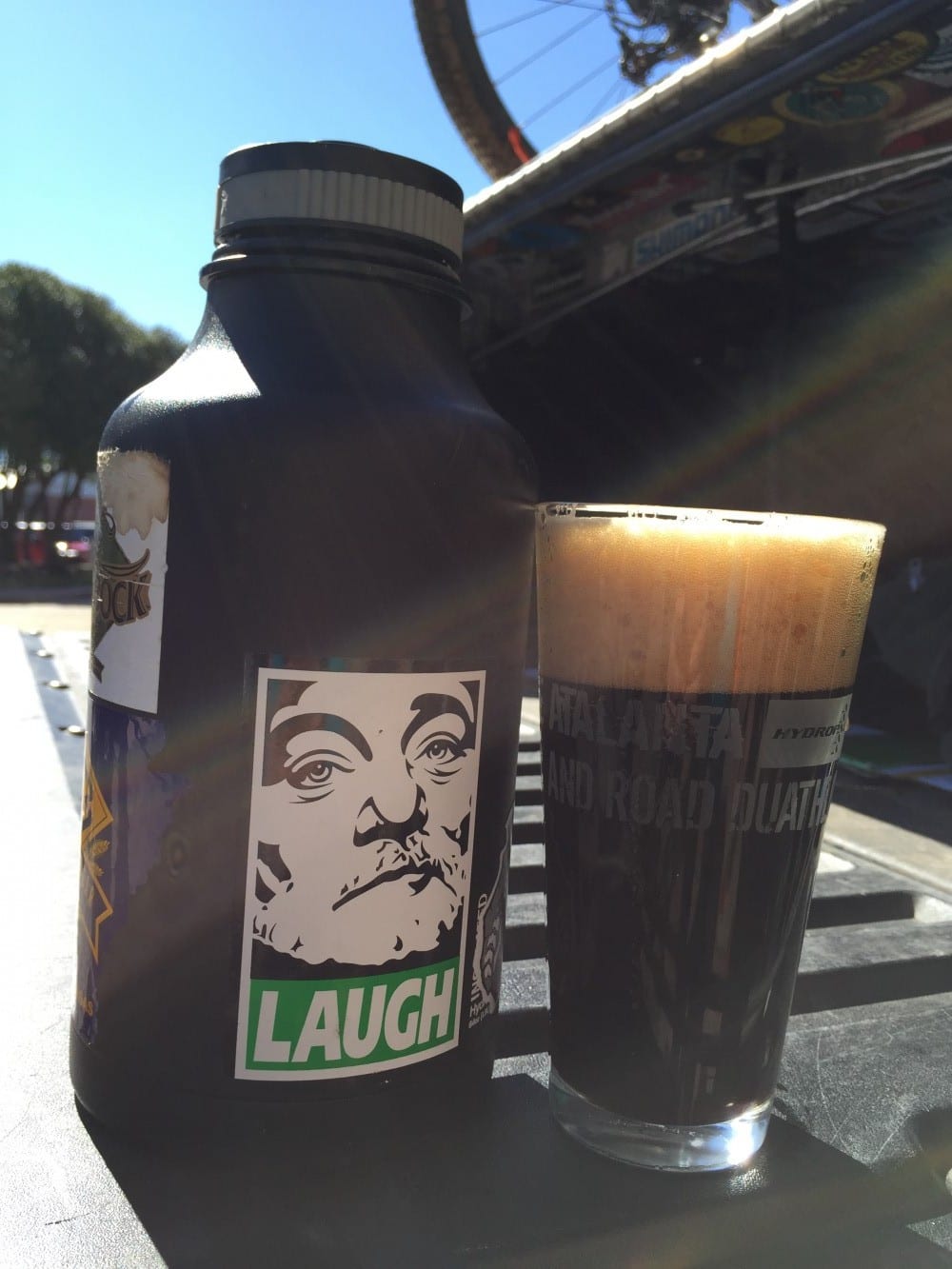 Race director, Tracy Byrd, contacted me earlier in the year asking me to make sure the Lake Atalanta Trail and Road Duathlon made it on the calendar. I was intrigued. I had heard of some new mountain bike trails at Lake Atalanta in Rogers, Arkansas and was looking for an opportunity to try them. Due to lingering Achilles tendon issues I am still sidelined from running, but this event was open to teams and Lisa loves to run.

We decided to make a weekend of it, taking some friends along for the ride and meeting others in Rogers to enjoy the event. Race organizers, Everyman Race Series, gave us the option of trail running with road cycling or mountain biking. I choose the latter to have a chance to explore a little of the new trail.

After an evening of local beer and food along with visiting friends, we headed to the hotel for an early evening. The start would be early and we would need a little time to set up transitions.

We arrived at the downtown parking location near the Frisco Caboose with a crowd preparing to head to the starting area by unloading bikes, checking tires, and pulling out transition gear. Though the forecast had the high temperature for the day in the 70s, the morning temps in the 40s ensured a cold wait for the race start and a very chilly ride down the hill.

A short, steep downhill ride in the dark took us to the Lake Atalanta park. The race transition was next to the park pavilion, music was playing, racers were nervously milling about and slowly the darkness gave way to morning light. We set up our transition area. Doing this as a team relieved a lot of race day stress, Lisa would start on the first run and I would have a few minutes to get myself ready, she would then have about the same amount of time to prepare for her second run.

The National Anthem was played and pre-race instructions were given then those racing the entire race solo and those doing the first running leg as part of a team formed a line near the lake for the start. The pre-race meeting included instructions to sprint out of the gate because the open distance before hitting the singletrack was short, putting those caught in the throng choosing to hold the pace of the runner in front of them or finding a good passing spot on the singletrack. Lisa managed to get in the pack with two of her regular weekend running partners who were both doing the race solo. The first run was 3.46 miles of undulating, punchy hills with a few flat spots including a section on the bank of the lake. The trails are wearing in nicely and the marks were easy to follow. One of the hardest parts of the run, mentally, was the places where the trail left the flat, open path to head back up to those fast little ups and downs that make the trail so much fun and so much pain at the same time with the temptation of the flat open trail within sight. Coming out of the trees and into a fast open downhill, the music and cheers from the transition area could be heard, encouraging runners to turn it on for the sprint into transition.

I was ready when Lisa came into the transition and as I grabbed my bike she put the timing chip around my ankle. A short run across the transition area and I was on the bike. The trail was soon headed up on what I call Ozark gravel. This is not like your normal gravel. these rocks are cat head sized and make traction tough. nearing the top of the hill,  I went down. Back on my feet again quickly, I ran to the top of the hill and jumped back on the bike. The trail continued to climb with short breaks until I was finally at the top of the trail and headed down. The next section allowed me to take advantage of some nicely bermed turns before crossing an unfinished bridge with a quick drop and hard left turn. Now on rolling trail and crossing a couple of bridges, this was a nice section to open up on. Soon, after a large bridge crossing I was on a dirt road dodging a few mud puddles. One more short singletrack section brought me back to the transition and on to my second lap. I vowed to clear the first hill this time and passed one racer on the way up  but as I was passing another near the top, he went down and me on top of him. I jumped up again and pushed my heart rate up as I worked to put some distance between myself and the two guys I’d just passed. The rest of the lap went fast. I dismounted as I came into the transition, Lisa grabbed the timing chip again and I was done with a very intense 4 miles.

While I was riding, Lisa was in the transition trying to keep her legs warm. While riders were wearing their legs out on the trail or road, those working on two person teams risked stiffening up in the time between runs. The second run was intentionally shorter and less difficult than the first run being about 2.8 miles, adding up to a full 10K for both runs. The course left the fast flat section around the lake and the west side of the trail intact taking out some of the hillier and more technical sections from the first run on the east side of the lake. I was standing on the last downhill section before the finish line to cheer her in, she passed by with a wave and a smile, looking forward to the finish line.

Crossing the line earned us a very nice pint glass and a bottle opener to help us fill the glass. But first, we had a lot of friends and strangers to cheer at the finish. Once the race was over I took a quick ride back up the hill to get the truck and come back to shuttle as many as I could back to the parking area where we all toasted our efforts with a refreshing recovery beverage poured in our race glasses. A quick lunch at the Iron Horse Coffee Co. and we were off to more adventures.

Full race results are available on line. (What? No Masters division for teams? We so would have won that.) We don’t have a lot of photos since we were kind of busy but what we have will be posted on our Facebook Page later today.