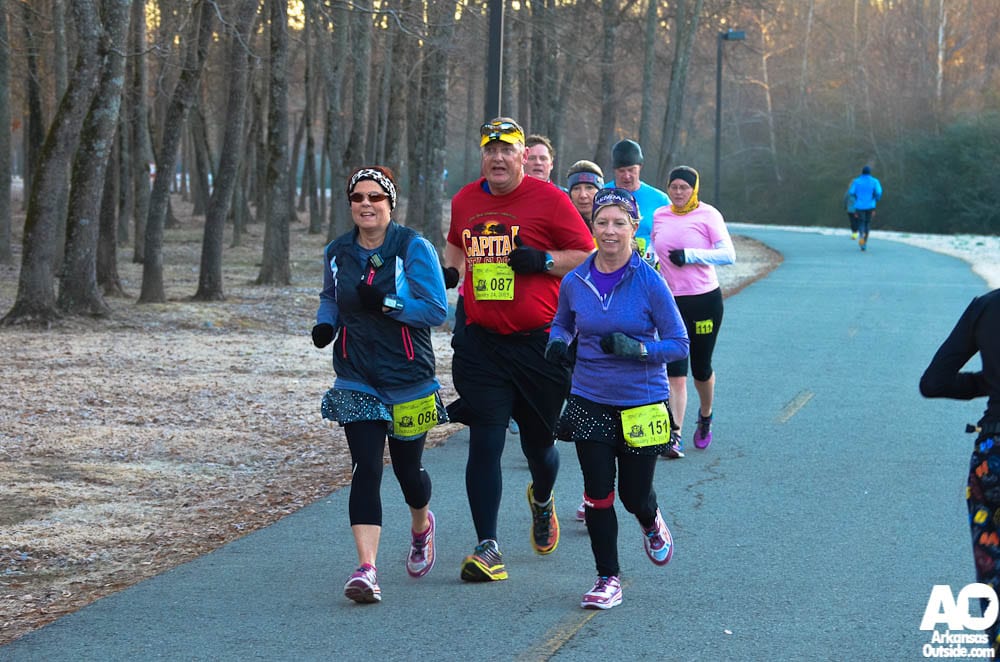 We didn’t arrive until well after the starting gun sounded, and by the time we approached the bridge on the Turner Creek we could hear the dance music stylings of DJ Anj and the cheers of the GO!Girls and others for the runners and walkers as they hit the mid point on the 2.6 mile out and back trail they would be calling home for five or ten laps. The 2nd Annual Team Loco Marathon/Half-Marathon was under way with 116 runners and walkers. It was freezing, quite literally, the temperature was below freezing at the start and carried into the early laps of the race. The temperature would rise, but not early enough to save many runners from finishing with sweatcicles in their hair. We spied a young man holding hot hands packets up to his cold ears at the finish line. The cold didn’t keep the competitors or the throng of supporters away. The short course was buzzing with activity as volunteers, families, and spectators cheered for, held signs for, and sometimes ran alongside their athletes. 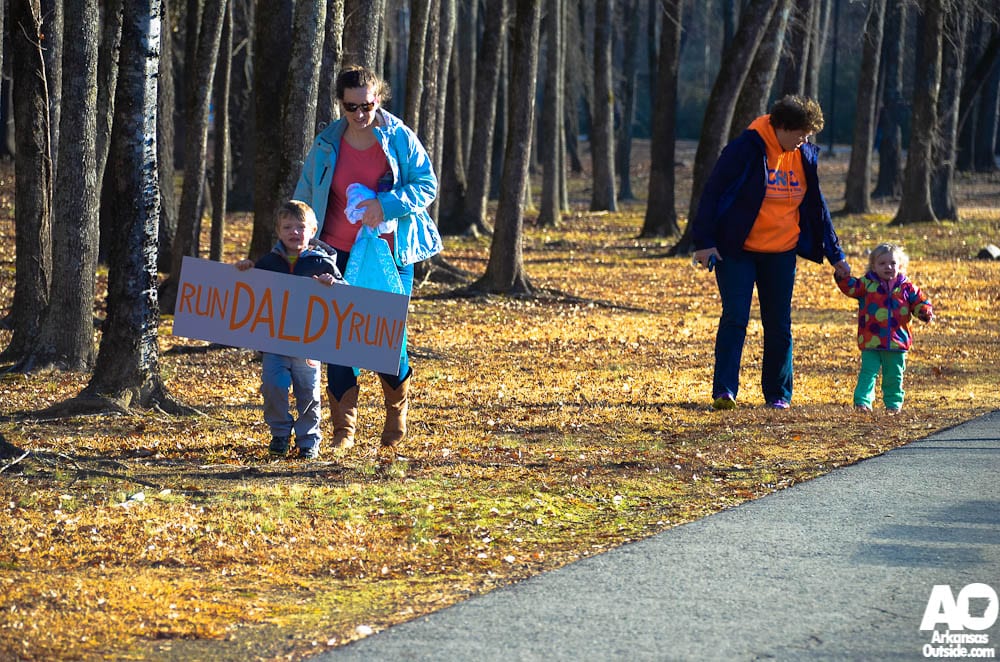 I was happy to be at the finish line to witness Casey Cragle beat her goal and set a new PR for the half marathon distance at 1:48. As soon as she spied the clock she turned on the afterburners and sprinted through the finish to celebrate. We watched a young man in fleece pajama pants kicking through several laps. Only later did we find out it was his 126th half marathon and he’s finished 16 marathons. He’s thirteen years old. On the other end of the age spectrum, 70 year young Larry Macon of San Antonio was running his 1410th marathon. Larry didn’t even start running until he was 52, an inspiration to anyone who thinks it’s too late to start a new sport. Maybe the next person to topple Larry off his Guinness World Record of running 225 marathons in a single year ran their first marathon this weekend. It might be Avery Ratliff who ran her first half marathon with Team Loco on Saturday. It is always an honor and pleasure to witness those moments of absolute joy and exhilaration of a first finish. Avery came in at just under two hours and could not stop the smile that lit up her face. It wasn’t just the participants enjoying the brisk early morning, the volunteers were having a great time too. While those at the start/finish and end of the line turnaround were busy recording race numbers and times, the crew in the middle was having a blast dancing, singing and cheering. No crew since the Village People has ever done YMCA better or with more energy than Katie McManners, Kristen Garrett, DJ Angela Sample, Lisa Perk, and Carol Moore. Those ladies stayed up till the last finisher, spreading their special kind of joy and inviting those who already finished to help them cheer others on.

The Story of Team Loco:

Team Loco started in late 2011 as a few of us that ran super early in the morning began to discuss goals for 2012. We all seemed to agree that 1000 miles in a year was a good goal. We didn’t really put a name to it until closer to the end of the year when Dave Whittenberg came up with the name Team Loco. This happened when all four of the Loco Founders were on a run together and we agreed it was a great name.  The first four are Belinda Jared, Jeremy McBride, Dave Whittenberg and David Edwards. We all managed to reach our goal that year and Team Loco was off to the races. We started a Facebook page and grew from that first four to over 360 members on our Facebook page today.
I can attest to the fact that at least two of those founding members is indeed, loco. David and Belinda may be nutty as  fruitcakes, unhinged, one might even say stark raving mad for some of the things they attempt, such as multiple marathons in short periods of time or several 100 mile races in a year, or directing a marathon-a heroic deed in itself no question.

The Story of the Loco Marathon/Half-Marathon:

We had always harbored the idea of a race, but never actually started one until last year when several of us were sitting in the lobby of a hotel in Memphis the morning of what turned out to be a canceled St Jude Marathon. Several Locos had planned to qualify for either Marathon Maniacs or Half Fanatics in Memphis and it seemed a shame to let the hard work of the previous races go to waste, so we banded together and put together what was a very low key, no frills race. Even though we had to take the race to the Tucker Creek trail in Conway due to time constraints it seemed to go well with runners so we brought it back to the trail this year and look forward to another great year.
Anyone who has tried to qualify for Marathon Maniacs only to be thwarted by canceled or called in the middle races knows the value of timing. Helping runners make it into that special club is just part of what makes the Loco’s worthy of the title Running Community Ambassadors. The current Loco group is made up of runners and walkers of all levels and speeds, marathon maniacs, half-fanatics, and plenty of athletes who just want to get outside and move their feet. Be on the look-out for this limited entry race next year, you’ll want to join the fun. 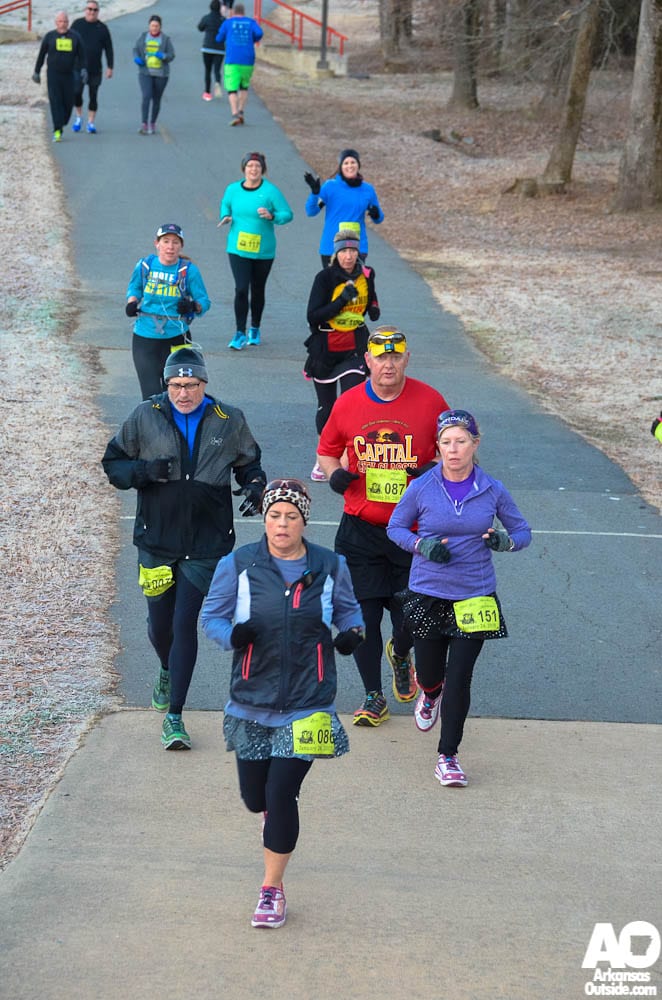 Thanks from the team:

Sponsors: We decided to put a little more into the race this year and have been able to produce great medals, t-shirts and customized bibs thanks to all of our sponsors.  Conway Running Club, Sei Bella Med Spa, Bob’s Grill, Elliott Electric and The Sporty Runner have all played a huge role in making the race possible. They helped defray the cost of medals, shirts and bibs so we could go a little higher quality.  We are very thankful for thier investment in our running community.

A Note from your Race Directors:

The Team Loco Marathon and Half Marathon is and will always be a low key affair that we make as high quality as possible.  Because this race is put on by runners, we strive to make it known as a race that is popular among runners because of the attention paid to runners of all ability levels.  We aren’t elite and not all of us are fast…but we strive for awesome in all ways we can.

If you examine the logo for this years race, you will see a Crocodile with a squirrel on its shoulder.  Those two have their roots in mascots that we have carried with us to races across the region and country.  Croco Loco was the first mascot we had and Bacon (named after our infamous love for the tasty fried goodness of bacon) was our second.  It was only appropriate that they be incorporated into our logo. The logo itself is the product of the brilliant, creative mind of accomplished trail runner and artist Ryan Holler.  He is also known for his design of the shirt for the War Eagle trail races in Northwest Arkansas.