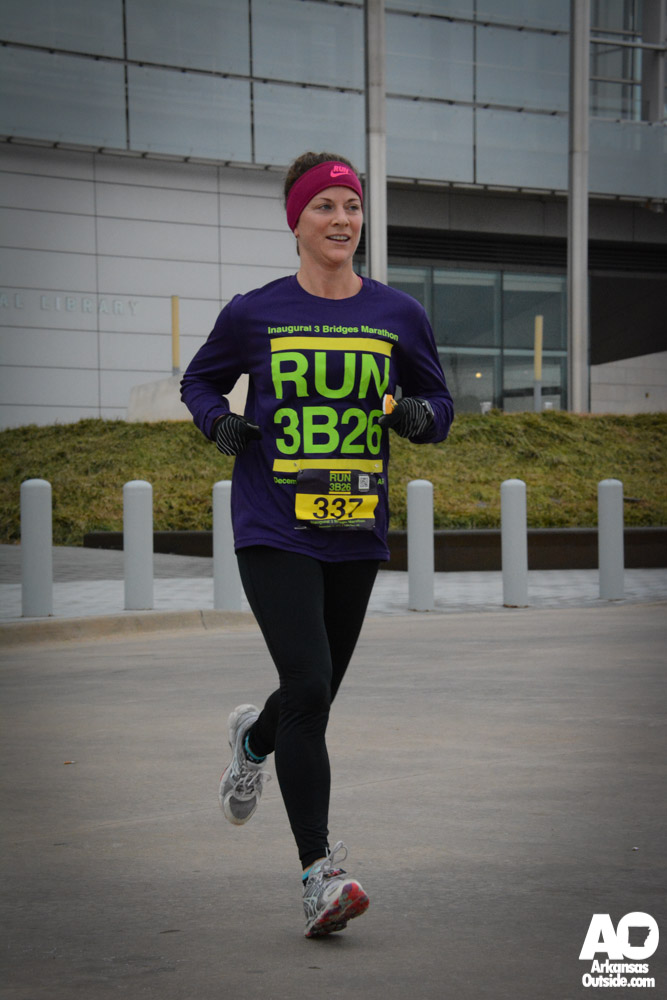 This year a new race has joined those ranks using three of the four pedestrian bridges that span the Arkansas and Little Maumelle Rivers. The inaugural 3 Bridges Marathon was run on Saturday December 28th, 2013. Prior to the race, social media and a regularly updated website helped racers stay informed. When registration opened there were only 200 spots available and when those spots filled quickly, a waiting list was started. Organizers were able to show sponsors that the popularity of the race warranted opening a few more spots so the waiting list was contacted and more registrations were taken to reach a 400 runner field. According to race director Jacob Wells, almost 20% of those registrations were from out of state. I heard a few people around the finish line telling other runners that they hoped they enjoyed their stay in Arkansas. It’s good for tourism to have successful events like this, giving visitors a chance to explore Arkansas while participating in their favorite hobbies.

It is a sign of good organization and thoughtful direction when a race tries to take the public use of space in to account. Trolleys ran from two different nearby locations as well as a couple of partnering hotels in order to leave parking for volunteers, race equipment and the few day users who didn’t know from all the media coverage and sign posting that there was a race underway. I arrived at the trolley stop just after 6 a.m. and got in line. Within minutes a trolley arrived and quickly filled up but just a few minutes later, another trolley was there to take another load of runners to the starting area. At the start area runners were huddled around the portable heaters, staying warm in the cold morning chill; there were also hot drinks available as well as race fuel like bananas and bagels. Many runners, including myself were lining up at the string of porta-potties under the I4-30 bridge. Another proof of catering to the needs of runners, race packets included an extra laminated bib number and zip tie providing racers a chance to shed unwanted layers just minutes before the race and have them waiting at the finish line as they cooled down and needed those layers back. I have learned to love this atmosphere, it always seems to be a giant family reunion. There are lots of hugs and high fives, the sound of “good luck” and “go get em” carries over the din of the crowd. Racers supporting other racers, fast or slow, everyone wishes their fellow pavement pounders the best of luck.

The course also made great use of an idea to keep the public impact at a minimum. By limiting the field of runners, the course could stay on the Arkansas River Trail with little need for traffic control and no need for road closings. Starting just east of the Interstate 4-30 bridge, the course would take runners over the Big Dam Bridge, the first of the three bridges, and onto the river trail in North Little Rock for almost nine miles to the Clinton Presidential Library Bridge, the second of the three bridges. Runners would take the loop in front of the fountains at the library to begin the return trip back across the bridge, returning to the river trail to cross the Big Dam Bridge a second time to the Little Rock side of the trail at mile 19. Someone on the course design team must have had a little streak of mean in them to make runners pass the finish line, listening to the announcer welcome finishers while we, the slower ones, had to deal with the fact that we still had another seven miles to run by crossing the third bridge, Two Rivers Bridge, and running the looped trail in Two Rivers Park before returning to that finish line.

A run like this requires a lot of support, many runners will leave behind their normal burdens of water bottles and other things they would carry if they were out running on their own. This race had so much support from local clubs and running associations on the out and back course that there was water, Gatorade and often food available almost every mile. That’s incredible. 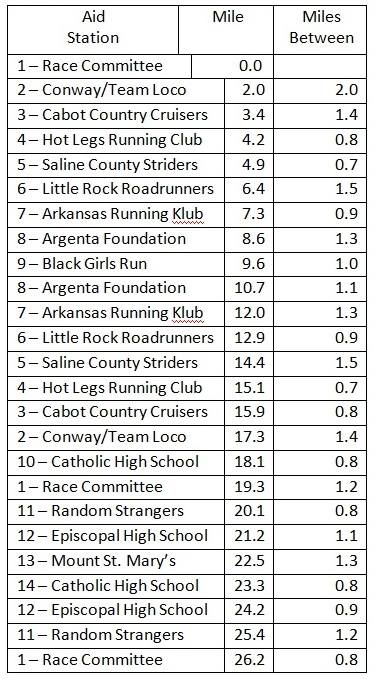 My running partner for the day and I took full advantage of these aid stations. We voted the Hot Legs Running Club the “best music mix” award and the Argenta Foundation as the “best cheerleaders”. At the Clinton Library turnaround at mile 9.6, the Black Girls Run group handed me a much needed and appreciated mini snickers and a tissue for my perpetually runny nose. Seriously, tissues y’all, what a nice treat. There is nothing better for motivation than to see a friendly face and there was no shortage of that out on the course, I lost count of hugs and cheers. I especially loved to see my lil’ bit Ironwoman Emily Hartman at mile 24 with a sign reminding me that I was indeed, sexy. Thanks Em, I needed that. We all need that little boost, so a big thanks goes out to all the folks who brought out cowbells and signs, even bundled up in fleece and blankets you all cheered and rang and made our day a little brighter for those few seconds. I never figured out who was offering the “Free Kisses if you PR”, but it sounded like a darn good deal.

Congratulations to the many runners who made this their very first marathon as well as those who were running their 10th or even 30th marathon. The course and the weather cooperated to give more than a few runners a nice personal record so congratulations on those PRs! Congratulations and thanks to the 3 Bridges Marathon team who set the bar high for other races. We’ll be looking forward to next year.