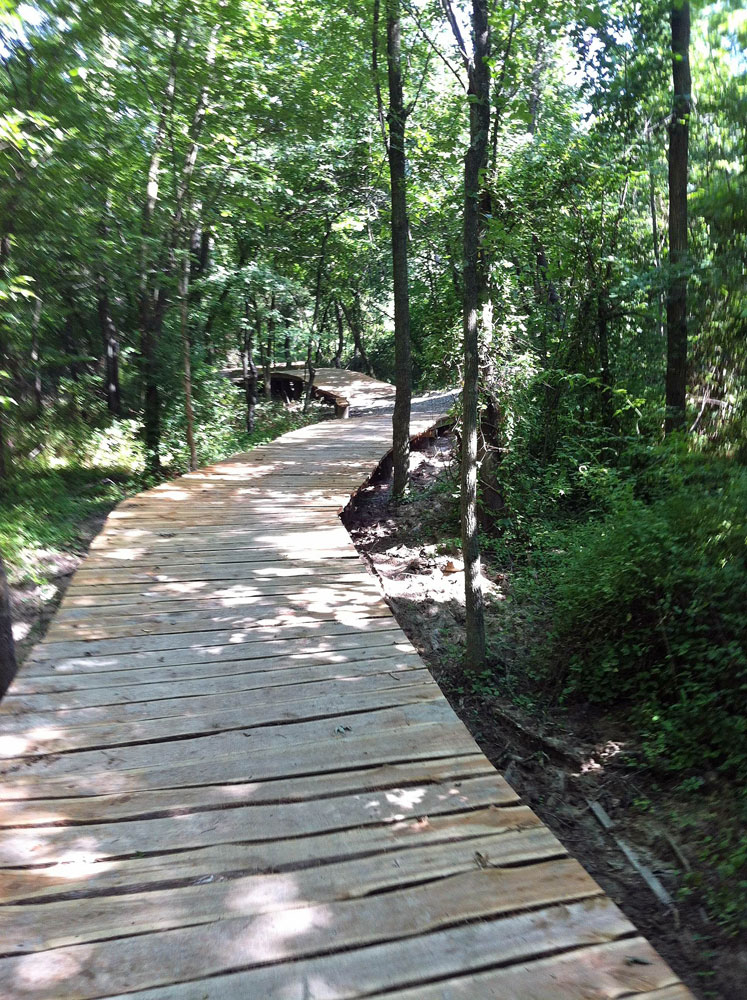 The Joy of the Urban Trail

I could never resist the call of the trail. – Buffalo Bill

To be happy living in the city, I need to have a trail nearby. Not a paved trail like the Arkansas River Trail or the Razorback Greenway Trail. Although trails like those are very nice and necessary for both transportation and recreation, I’m looking for natural surface, dirt, singletrack, a path through the woods. When I first moved to Little Rock, I quickly found my way to Pinnacle Mountain State Park. I was working 60 to 70 hours a week and my family had not yet followed me from Dallas so to reinvigorate myself after long hours in a windowless building, I would hike to the top and check out the sunset or enjoy a crisp morning or just work off the poor eating that came with hotel room living.

After a couple of years in Central Arkansas, I bought my first mountain bike which had its maiden voyage at Allsopp Park. On that first ride I saw Jesus. Okay, it wasn’t really Jesus but it was somewhat of a religious experience. I had just rolled down a gravel section with a turn and a large tree at the bottom. Not making the turn would make me one with the tree. I trusted the bike and it didn’t let me down. As I came out of the turn, there He was. At the time there was a guy most people in town believed to be homeless who walked the streets in a friars robe and sandals and wearing the classic hair and beard styles of the stereotypical image of the Son of God, everyone called him Jesus. I had a witness who saw me make the turn, I tried to act casual as I passed him saying hi and he returned the pleasantry. I’ve enjoyed mountain biking ever since that day.

Years later I took Lisa to Allsopp for her first mountain bike ride hoping that she would receive some of the same mountain bike Karma from this classic urban trail near downtown Little Rock. We did a lap of the western edge of the park during which she fell once at a stream crossing. This is where I learned that people attract the Karma that they need. At the end of the lap Lisa had this spark of energy and immediately said she wanted to do it again but this time she wouldn’t fall…and she didn’t.

Over the years I’ve enjoyed a lot of urban trails both in Arkansas and on trips to other states. Last week, while on a business trip to Fayetteville, I was able to find some time to visit a trail I hadn’t been on in several years, the Lake Fayetteville Trail. The trail was pretty weak years ago being very rooty and boggy with poorly designed lines that caused a lot of erosion. I had heard that the Ozark Off-Road Cyclists (OORC) along with Progressive Trail Design (PTD) had been working out there on a lot of re-routes and tread improvements, I had to give it a try.

The first thing I found was a bermed flow section that allowed for smooth riding going back and forth through the trees. Next up were new bridges that Boy Scouts had built from PTD designs, beautiful bridges that meandered through a section that is often wet. This would be considered a beginner to intermediate trail that follows the edges of the park all the way around the lake. The south side of the trail is the most difficult with short hills but is still lots of fun since it drops down near the lake and has a roller coaster effect if you can keep your speed up. Riders, hikers and trail runners can do a single loop for just over 5 miles or turn around and enjoy it from the other direction for over 10.

Urban trails are a Gateway Drug

The close proximity of trails like these invite the uninitiated to find trail joy without getting too deep in the wilderness. They provide us places to take a walk away from roads and buildings where we can disappear in our own thoughts or enjoy the search for birds and other wildlife or try to name as many plants as possible. Like Allsopp and Lake Fayetteville they are usually places to have a family picnic and introduce your kids to the trail. Or maybe even try that first mountain bike ride.

If you live near or use these trails it’s important to remain vigilant as things can move very quickly when others make decisions that could affect your favorite outdoor space. Case in point, this possible loss of the Lake Fayetteville Trail (link). You can also keep up with other happenings on this wonderful trail at the Save Lake Fayetteville Facebook Page.

Also, Wednesday night mountain bike rides are back on at Allsopp Park in Little Rock. Be ready to go from the Spokes Bike Shop on Kavanaugh and Markham at 6 pm.

What is your favorite local trail?