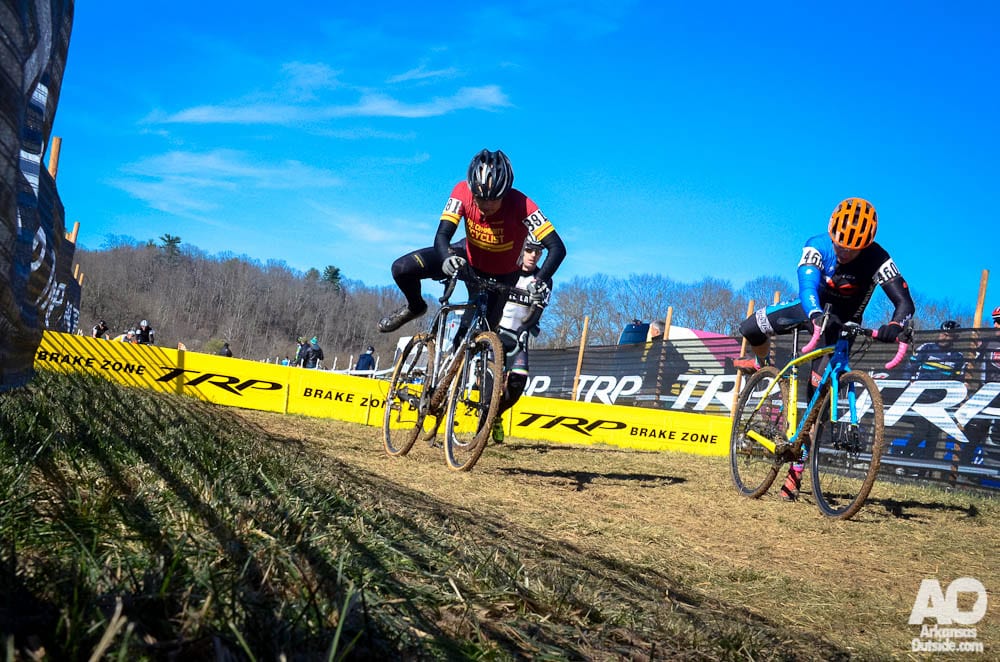 So what is all this talk of world championship racing in Fayetteville, Arkansas this weekend? If you’re new to the cyclocross world, you may have some questions.

According to USA Cycling,

Cyclocross is a unique, non-Olympic discipline of cycling that can best de described as a cross between road cycling, mountain biking and steeplechase. Watching cyclists dismount their bikes to run up stairs and steep embankments often arouses questions about the origin of the sport. Although it is difficult to find the exact reason, many legends have it that cyclists would race from town to town off road to bring a new element to road racing. These off road adventures could have often required dismounting to hop fences and impossible terrain.

While many people refer to type of bike used for cyclocross as a “cx bike”, “cross bike”, or “cyclocross bike”, most competitors actually use modified road bikes. These road bikes are then equipped with skinny, knobby tires, disc brakes and slightly different geometry which allows for better clearance when passing over various obstacles.

Cyclocross races generally take place on a closed circuit in a park or other open land with competitors racing multiple laps. Since the cyclo-cross season generally takes place from September to February, races are often times plagued with adverse weather conditions such as snow, rain, wind and mud – all of which add to the sport’s allure.

Riders begin in mass-start fashion and must navigate through both paved and off-road terrain, often times dismounting their bikes to hurdle barriers, climb steep hills or stairs, or traverse other obstacles.

Weather conditions aside, cyclocross racing is a very spectator-friendly discipline of competitive cycling given the short, closed course, the fast pace, the unique equipment and the interesting obstacles the competitors are faced with. Also, with relatively few cyclo-cross specialists in the world, the discipline lends itself to road and mountain bike athletes alike as riders from both major disciplines compete on the ‘cross circuit each year. Throughout the fall and winter, cyclo-cross racing provides specialists in other disciplines with a competitive outlet during the off-season.

The last sentence becomes important to us Arkansans, “Some of the most prestigious cyclo-cross events in the world include the UCI Cyclo-cross World Championships…” This is what is happening in Fayetteville, Arkansas this coming weekend. This is only the second time in history, dating back to 1950, that the world championships have been held outside of Europe. That other time was in 2013 when they were held in Louisville, Kentucky.

Another key takeaway from USA Cycling’s description is how spectator-friendly the event is. Spectators line up along the course, often with cowbells and other noisemakers, to cheer on riders as they take laps around the course. There are usually multiple places where spectators can enjoy the race and often move around during the course of the race and for different races.

Cyclocross is not new to Arkansas. Arkansas Outside staff have been reporting on and sometimes participating in cyclocross events for over 10 years, but the sport has been popular here for longer than that. Super-Prestige Series, SHAM Events, and AllCross have all hosted series over the years including state championships. A few years back we went to the National Cyclocross Championships held on the grounds of the Biltmore in Asheville, North Carolina to follow several Arkansas racers participating in the event.

What will the Spectators See?

Besides the food and beer tents, spectators will be treated to watching racers representing 25 countries in 7 different races. Here is the schedule from the race website:

An opening ceremony will be held Thursday, Jan. 27 from 5:30 to 6:30 p.m. at Fayetteville Town Center Plaza. It is free and open to the public. Adding to the excitement of this historic event being held on U.S. soil for only the second time in 72 years, will be students from Fayetteville Public Schools as they put on a Parade of Nations to represent the 25 home countries of the race participants. Additional details will be announced soon.

All times listed are in Central Standard Time.

Where can you learn more?

Various national and international cycling media have a lot of information on the races and competitors themselves including:

There is a lot of good information in the Spectator Guide. Congratulations to Fayetteville for hosting this incredible event. We hope to see you there, how often will you have a chance to witness an international world championship in The Natural State?