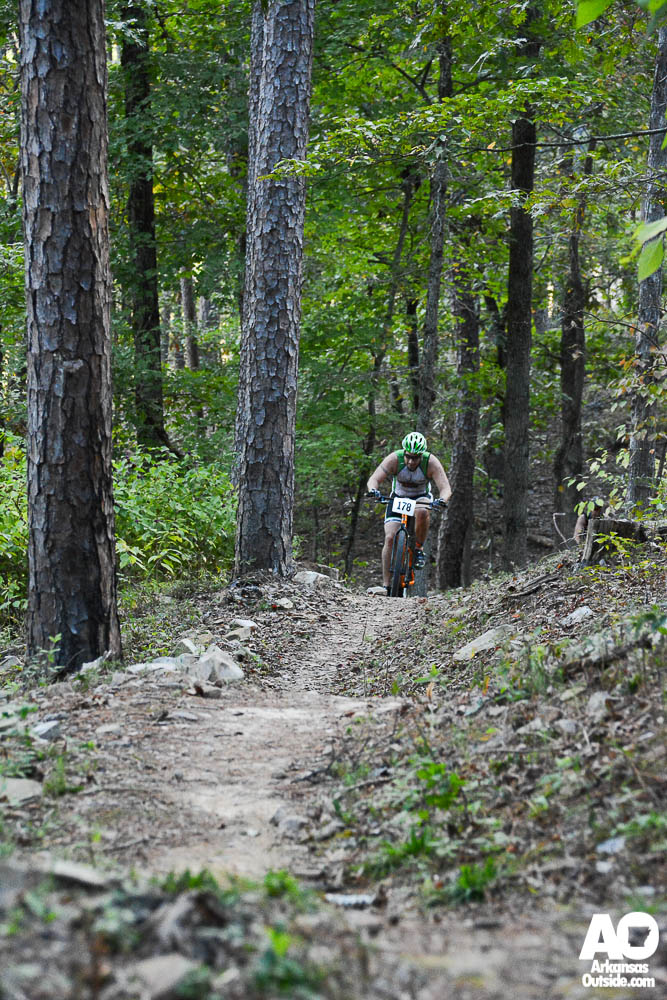 You can do it all at DeGray

The notes of  a classic Bob Seger song flowed past the transition area, around the multitude of triathletes and over the crowd of volunteers and spectators, covering the spillway parking area in a warm blanket of 70’s nostalgia. It was a cool, crisp October morning, a hint of Fall in the leaves around the lake, cool enough that the water temperature to drop to allow the racers to wear wetsuits for the swim portion of their race.

The DeGray XTERRA continues to be one of the preimer off-road triathlon events in the state. Consisting of four events this year, a standard XTERRA sprint, a newer epic distance XTERRA, an open water swim all took place this past Saturday and then on Sunday, the dry land version duathlon.

The water was a little low in the lake causing a change in the swim course from last year, swimmers would be utilizing the boat ramp this year. The light breeze barely rippled the water making great conditions for the swim. Sprint racers would go first followed 15 minutes later by the epic group and open water race, those groups would do two laps of the half mile course. Managed by the US Army Corps of Engineers, DeGray Lake is one of the cleanest in the country having allowed little development along the 207 miles of shoreline.

Once out of the water, the racers made their way through the transition area, in one side and out the other, and on to the mountain bike course. I sat in the woods taking photos of the participants as they made their way up the first climb of day, I began to pine for a ride myself. The Iron Mountain trails are among the best mountain biking trails in the state. Currently at 18 miles of total trail, the race would use about 15 of the sweet single track. Those who signed up for the epic race would do two laps.

Once both groups of racers were past me, I headed back to the parking lot/transition area and then up the trail running route. Parts of this area have been used for the run in previous XTERRAs, but there is a new entrance to the section that took the racers, now on foot, quickly into the woods and almost straight up a power line swath. The sprint group would do one lap of the 3.3 mile course while the epic racers would do three laps.

It was such a beautiful day that I decided not to wait on all the runners from the epic race. Once several of them started the run, I went back to the truck to get my bike. I put the camera away, got dressed in cycling garb and headed out to find Fred Phillips of DLT Multisport, the race director/organizer, to see if he needed someone to sweep the mountain bike course, he did. I had a job, ride the full course until I caught up with the last person and then ride in with them making sure all racers made it through.

About 4.5 miles in I caught up with Joe from Michigan. He was on his final lap and would be my riding partner for the rest of the day. The markings on his right calf told me he was 60 years old. He looked pretty fit. He told me that he had only been mountain biking for about three years. The race had brought him all the way down from Michigan and he seemed to really appreciate the Iron Mountain trails, commenting often about how much more rock we had then he was used to at home. It was the long downhill flows that he seemed to really enjoy. Joe had found a campsite at DeGray Lake Resort State Park and was thrilled with the beauty and peacefulness so close to the race venue.

We worked our way over the rock garden section and across the road to the older trails, slowly winding down the hill. A short uphill ride to the road again and we got to drop down one of my favorite sections. I hung back a bit at the top, checking my emails to let Joe get out ahead. I wanted to let it rip on this section. I was not disappointed by the ride. Catching up with him near the end of the section, I decided to just ride with Joe the rest of the course and hear his story.

Eventually we dropped into the spillway area and I followed him to the transition where we parted ways as he headed out on his run. He would have to be a little faster on the run to make the cutoff. I didn’t wait around for him, I had other places I needed to go. My easy 15 mile ride was just what I needed on this beautiful day.

Results for the two XTERRA races and the Open Water Swim are available at No Limits Timing.

All the photos are posted on our Facebook page.