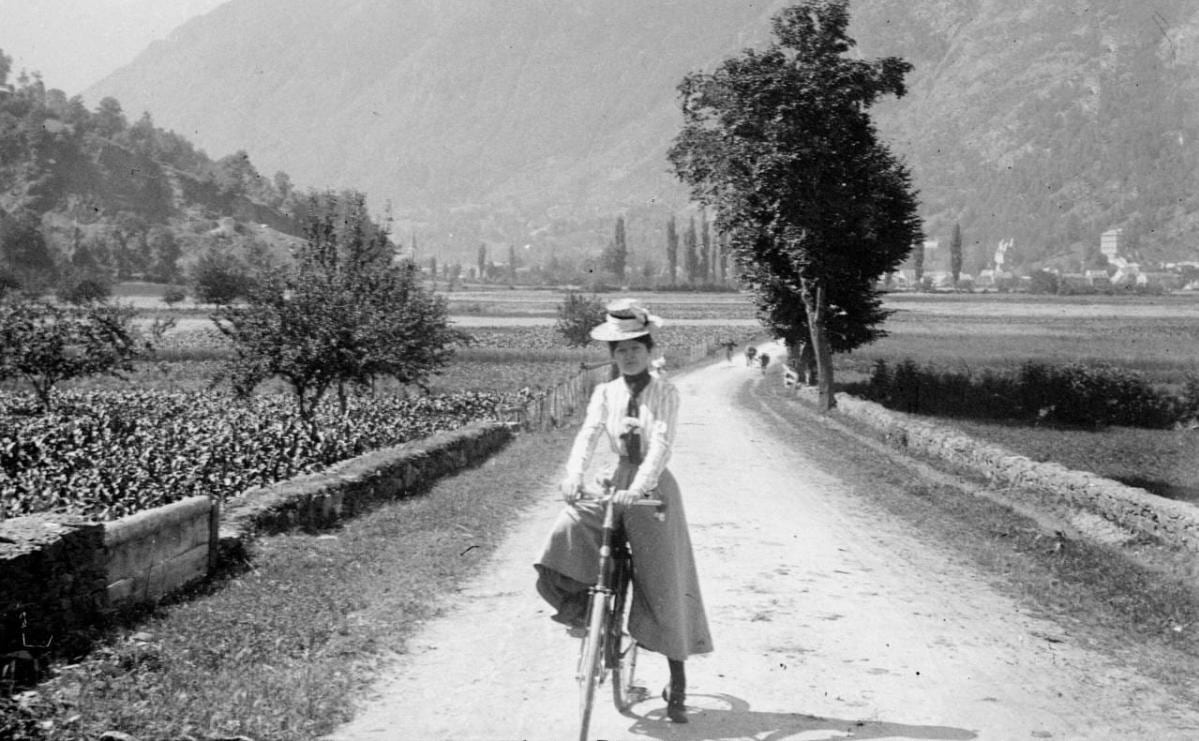 A Woman, Two Wheels and a Wager

In the summer of 1894, a young wife and mother with no prior experience riding a bicycle set out on an adventure that would take her around the world in fifteen months, much of it by bicycling. Annie Cohen Kopchovsky was a slight woman in her early twenties with three children under the age of six, an unlikely contender in a quest to travel around the world by bicycle. Breaking almost every social taboo concerning women of the time, she left her family to travel around the world. How could a young Jewish mother possibly leave her family responsibilities to travel the world? Mrs. Annie Cohen Kopchovsky was scandalous. What was her motivation? It seems it might have been the same incentive that drives many of us: money and perhaps fame. The narrative suggests that two wealthy Boston businessmen placed a substantial bet that a woman could not repeat the feat of Thomas Stevens who had ridden his bike 13,500 miles around the world a decade before. The wager was to provide Annie with $10,000 should she succeed. That would have been ten times the average yearly salary of the time.

The terms of the wager aren’t completely clear. It did stipulate that she had to start off with no money. She could not accept gratuities, she was to cycle 15,000 miles and she had to complete the trip within fifteen months. Her proof of travel would be the signatures of American Consuls in the countries she visited. In addition to earning traveling expenses, she had to earn $5,000 above expenses. Annie’s plan for earning her way became clear at her send off. As she readied to ride away from the Massachusetts’s State House, a representative from Londonderry Lithia Spring Water Company paid her $100 to hang their sign from her bicycle and to use their name as her own. Annie Londonderry was what many a modern day rider dream of being: a sponsored cyclist. It turns out Annie was a marketing genius, and a teller of tall tales which only served to increase her celebrity. She told wild stories of being attacked and claimed to have almost killed one of her attackers, of being imprisoned in a Japanese prison and witnessing the murder of a Chinese prisoner, of almost being run over by trains several times and of being shot herself. Most of these stories are unconfirmed, but her ability to market herself had made her a celebrity by the time she reached Europe in the fall of 1894. Her bicycle and her person were covered with the placards, ribbons, and banners of her sponsors.

Annie’s original bike was provided by Pope Manufacturing, the fabricators of Columbia bicycles. It was a drop frame (women’s) and is said to have weighed 42 lbs. Her multilayered skirt, high necked and long sleeved shirt, tailored jacket, hose and shoes added several more pounds. Annie wasn’t the only female cyclist at that time, already many women were cycling and in the years following Annie’s ride the number of women riding bicycles would swell. Most of them were still wearing the traditional and mandatory garb of the Victorian Era: petticoats and hoops, corsets, multilayered heavy skirts that reached the ground, long sleeved shirts with high necks, tailored wool jackets, hosiery, gloves, flat-topped hats and boots. Cycling on drop frame bicycles allowed skirts to be worn, but many women were adopting shorter skirts and inventing accessories like Bicycle Skirt Fasteners to make cycling in skirts easier. Allegedly Annie took out of Boston in June of 1984 with the clothes on her back, a change of undergarments and a pearl-handled pistol. She had no rain gear, her shoes were most likely leather, her skirts could double in weight when wet and would drag in the mud. Regardless she made it from Boston to New York in July and then Chicago by September. 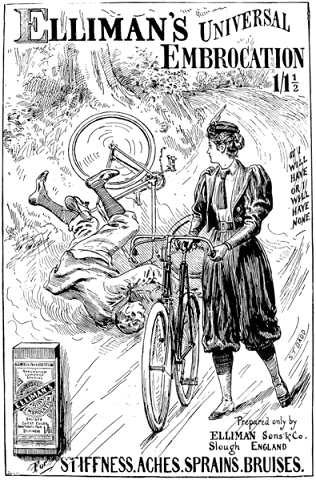 By the time Annie reached Chicago, she was exhausted. Her clothing was impractical, her bike was heavy and she realized she had set herself up to cross the Midwest in winter. The option of giving up entirely was bandied about. Instead she persevered, acquiring a new bicycle from Sterling Cycle Works, a man’s ivory Roadster with gold trim that weighed 20lbs less than her Columbia. Because it was a man’s bike, she would not be able to ride it in skirts because of the top tube; she would have to alter her clothing too. Bloomers had been around for decades, but Annie had resisted wearing them as outerwear until this point. But wear them she did. Ultimately it was decided she would reverse course, her apprehension of continuing her westward route in winter won out and her course backtracked to New York to catch an ocean liner for Le Havre France. When Annie reached Buffalo, New York, her reluctance to don clothing considered inappropriate for a woman of the time was diminishing. Though bloomers were an improvement over skirts, she went a step further and purchased a pair of boy’s pants which she altered into knickerbockers. She added a blue yachting cap to her new pants, tweed coat and vest. According to a local Buffalo newspaper her outfit was “an extraordinary and exceedingly unfeminine costume.” By this time people had come to expect a bit of outrageous behavior from Annie “Londonderry” so when she asked “Is this rig immodest?” it was most likely a rhetorical question.

As she traveled across France her fame grew. No doubt she must have been a charismatic woman. She earned money by selling brownie pins, giving lectures and picking up new sponsors like the perfume makers Lorenzy-Palanca by handing out flyers for their products.  It seems Annie Londonderry had no difficulty at all putting on a show for the public. Cycling in France was already extremely popular. Though cycling clubs and tracks were emerging in the US and around Europe, France was especially known for its bicycling fever. Tailors were busy designing cycling attire, and Parisian writer Arsene Alexandre wrote that “No class of the community is free from the passion, the workers as well as the butterflies.” It seems Annie was quite an attraction for the general public but the press was not always so kind to her. Already her motives and methods were being called into question. Many journalists scoffed at her as she traveled across Asia. Some thought she was no better than a charlatan, a circus act, perhaps even a con artist.  She welcomed the controversy as another of her skills seemed to be that of a good political spin doctor.

Annie and her bike were passengers aboard the ocean liner Sydney when it left Saigon mid February bound for Hong Kong, Shanghai, and Nagasaki. On March 9 she was homeward bound on the Belgic out of Yokohama. And the press at home was becoming increasingly distant if not hostile. But for the ordinary citizens she would encounter on her path back across the Western US, she was an icon: an adventurer who’d been out to see the world, a witness to the exotic realms across the oceans.  There was never a shortage of cycling club members or citizens to join her for a stage or two of her journey. As she rode into Chicago on September 12, 1895, the quiet end to her adventure seemed a tad anticlimactic, neither of the major Chicago newspapers made mention of it. There was no parade. Her only welcoming party was a group of wheelmen representing the Sterling Cycle Club. She had suddenly become Annie Cohen Kopchovsky again. A Jewish wife and mother albeit $10,000 richer. 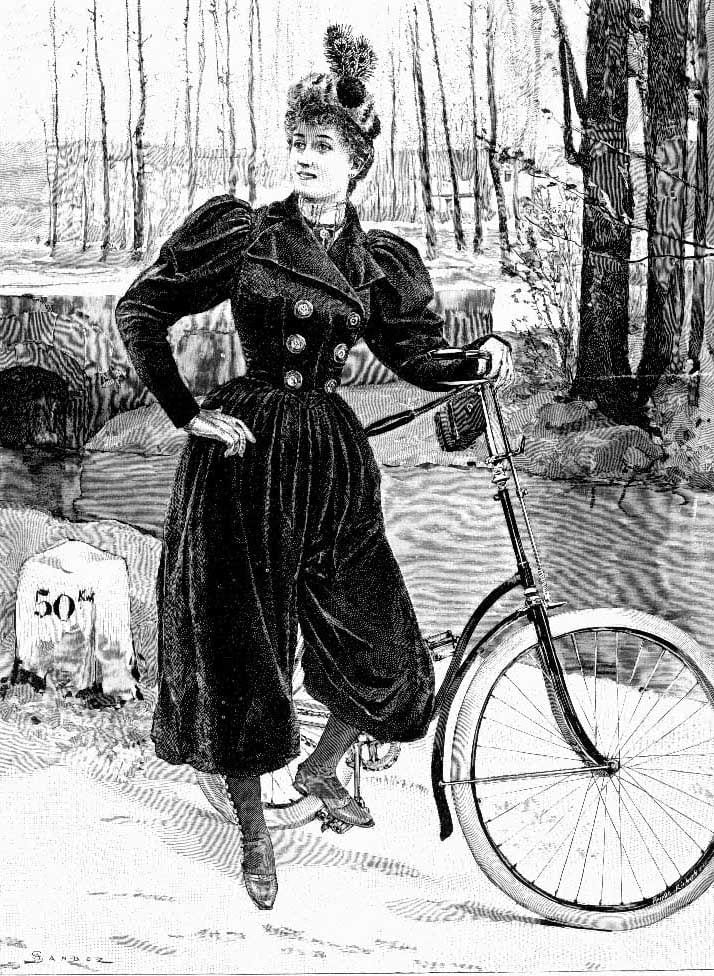 Her tall tales, her actual mileage, her distinctly bold personality caused many to question her honesty. The distance she actually traveled by bike is uncertain. But what isn’t in question is that she had a plan to win a bet, she set out to win, and she found ways to make sure she did. There is no question that she used steamers, ocean liners, and trains to add momentum to her journey. Why don’t we all know more about Annie “Londonderry” Kopchovsky? For years after her brief moment in the limelight faded, her story was lost. Upon her return to her former life she moved her family to New York and began writing for the New York World under the byline “The New Woman”.  Apparently the roguish Annie Londonderry wasn’t far removed from Annie Kopchovsky. She sent her children off to boarding schools when they were still very young. She had several business ventures on her own and with partners including her husband. Her journey was rediscovered by a reporter while investigating another story. That reporter asked family members about Annie until finally one gentleman, a great grand-nephew, decided that he needed to probe the matter on his own to discover whether the reporter’s story of his great grand-aunt had merit. And when he determined it did, he set out to tell her story.

For more on Annie Cohen “Londonderry” Kopchovsky and the role of bicycling in the lives of women at the turn of the 20th century I highly recommend:

Around the World on Two Wheels: one woman one bicycle one unforgettable journey by Peter Zheutlin
A Wheel Within A Wheel: How I Learned to Ride the Bicycle by Frances Willard
Wheels of Change by Sue Macy
http://www.annielondonderry.com/

The Annie Londonderry documentary to be realeased Summer 2012 http://www.spokeswomanproductions.com/