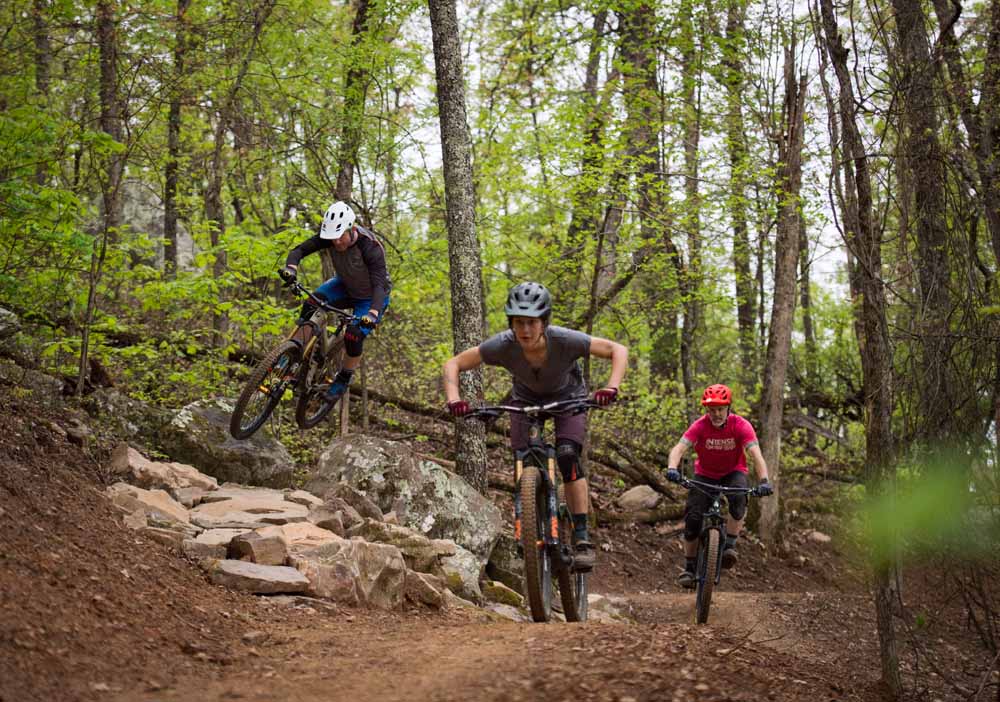 Another New Monument Trail Opens in an Arkansas State Park

Last month Arkansas State Parks and the Arkansas Parks & Recreation Foundation announced the opening of the first Monument Trail at Hobbs State Park-Conservation Area in Rogers, Arkansas. That trail is completely open with the only improvements to come will be opening up some bike-in campsites, added parking, and some other features not related to the trail design. It’s a beautiful ride and, from what we’ve heard in social media, a big favorite among local riders.

This Saturday, July 27, the first phase of a new series of Monument Trails is set to open at Mount Nebo State Park in Dardanelle, Arkansas. Due to totally different terrain including much more elevation and rock, this trail is very different than the new trails at Hobbs State Park. And that’s a really cool thing. One thing we love in Arkansas is our diversity. Please read the news release below, enjoy the photos and watch the video and GET STOKED!
Short Video:

The state’s second Monument Trail opens at Mount Nebo State Park on July 27th, bringing yet another experiential mountain bike trail to Arkansas. The new Monument Trail at Mount Nebo State Park marks a significant investment in cycling in the Arkansas River Valley, providing a world-class riding option easily accessible from Russellville, Conway, Little Rock, and the Ouachita and Ozark Mountains. It is expected to provide a national and even international draw for riders wanting to travel to top mountain biking venues.

“The Monument Trail at Mount Nebo is driven by a desire to introduce truly unique experiences to state parks across Arkansas,” said Suzanne Grobmyer, the executive director of the Arkansas Parks & Recreation Foundation, one of the founding entities behind the trail system. “And this first trail at Mount Nebo, which is an intermediate or blue trail, produces a series of challenges for riders to progress and learn on.” (More information on Monument Trails)

A grant provided to Arkansas Parks & Recreation Foundation by the Walton Family Foundation at the recommendation of Tom and Steuart Walton in the amount of $519,000 will support the construction of the first phase of trail at Mount Nebo, which includes the special features, signage and bike amenities to complement the world-class riding.

“The new Mount Nebo trails will be approachable for riders from around Arkansas and beyond, but the first phase features big, beautiful berms and optional advanced gaps and jumps,” said Amber Chambers, the trail project manager for the Arkansas Parks & Recreation Foundation. “We encourage riders to ride well within their skillset. It’s important to check out a feature before attempting it. Phase One of the Monument Trails construction at Mount Nebo was performed by Rock Solid Trail Contracting with input from Arkansas State Parks.”

Arkansas State Park team chose the name Chickalah (pronounced /chuh-kEE-luh/) Loop after the scenic creek that flows through this part of the park. Park Superintendent Scott Waniewski said the new trail would open up never-before-accessible portions of the park.

“These 7 miles of new trail will allow our visitors to see some beautiful parts of the park that were never before accessible,” Waniewski said. “Cyclists are encouraged to park at the Bench Trail Overlook, just below the top of the mountain on Highway 155, to access the trails. The 4-mile Bench Trail continues to offer novice riders an easy green trail option around the mountain, which has its own beautiful views of the mountain.”

The completion of the first phase of Monument Trails at Mount Nebo brings professionally built mountain bike trails to a part of the state that has not had the opportunity to enjoy the economic impact that this type of cycling infrastructure has created in other parts of the state.

Arkansas State Parks officials said the opening of the Monument Trail at Mount Nebo is another way to engage Arkansans with the unique offerings of the state park. Mount Nebo offers biking, hiking, camping, rentable cabin spaces, tennis courts, a pool, a small museum, and even hang gliding for experienced flyers.

“Mount Nebo State Park offers an opportunity to anyone because there’s such great variety of activities,” said Grady Spann, director of Arkansas State Parks. “When it comes to riding the new Monument Trail, there is not a better 7-mile stretch of trail in this state, and I believe it will be easy for cyclists and families to make a weekend out of their visit.”

The second phase of the Monument Trail at Mount Nebo was recently approved to be built, and construction is expected to bring 17 more miles of trail. The phase two trails will also feature a greater variety of terrain, bringing green, blue and black options to riders who choose to experience Mount Nebo.