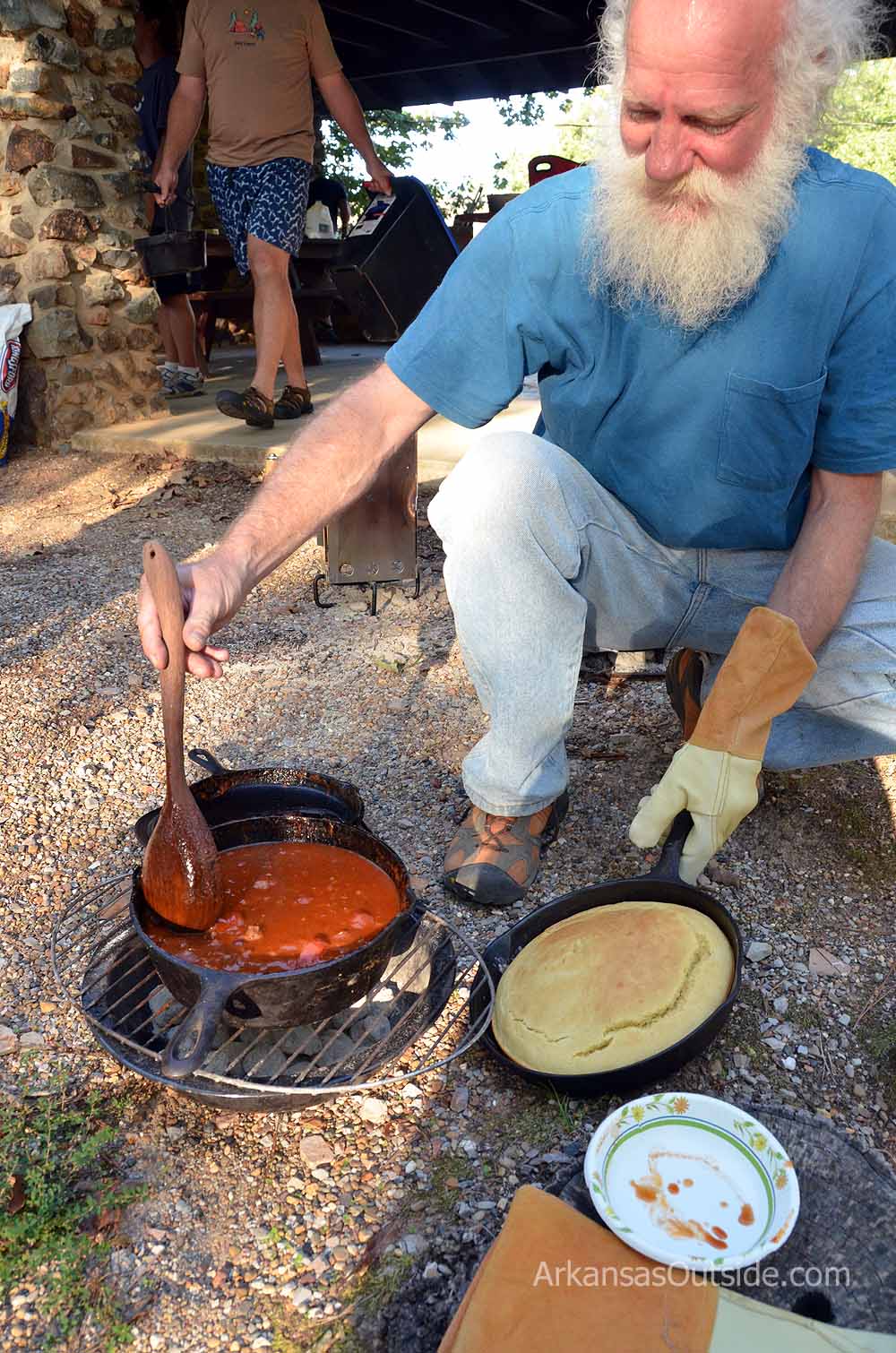 (See Part One of this Story) After a few hours in Little Rock we were ready to get back to our friends at the 19th Annual Arkansas Canoe Club Rendezvous. As we crossed the I-30 bridge over the Ouachita River we noticed some boaters still playing at the Rockport Ledge but decided that they would be heading back to Camp Couchdale soon and we would be there to meet them.

There was a very casual atmosphere around the camp, people going on walks; some, like the kids above,  finding a quiet fishing spot and there were people cooking. Not just any cooking, dutch oven cooking. The first event in camp this evening would be a dutch oven cook-off. Contest participants were busy heating their coals and preparing their ingredients. Some of the participants took the time to do a little workshop and answer questions about their creations.

Many of the participants were more than willing to show off their entries.

Of course we weren’t done with food yet, it was time for eating. As the sun began to set we moved into the main hall for a giant potluck dinner. A staple of Rendezvous, the potluck brings everyone together.

One of the features of the pot luck was the custom kayaking cake.

As everyone finished eating dinner, the party started. Drawings for all kinds of cool stuff  included hats, kayaking equipment and even a beautiful new kayak. Master of Ceremonies, Jeremy Mackey of Ouachita Outdoor Outfitters kept things moving along.

Once the dinner and drawings were over the party moved back outside, sitting under the sponsor canopies while live acoustic guitar was played by someone in the camp. We talked and laughed into the night. A young friend had brought her unicycle and began giving lessons under the street lights. A group moved past us several times playing glow-in-the-dark bocce ball. It was an enjoyable evening and we would sleep well after the busy day.

Morning came and again the early risers could be found near the coffee pot in the main hall. As more people came into the building I moved outside where I heard it: a distant crack of thunder. A few minutes went by and I heard another one. I checked the weather radar on my phone and saw a storm heading our way. The inventory went through my head. Two awake, one still asleep in the tent. Nothing much set up outside the tent and we had the canopy up with stuff safe under it. Maybe we would sit it out. CRACK! Really, we would be fine. Then the lightening started. I wavered, I flip-flopped. CRACK!!!! “PACK IT UP!”

From the time we started moving to fully loaded in the truck and kayaks back on top was 15 or 20 minutes. Now what? It was pouring down with lightening and thunder and looked like it wouldn’t be letting up soon. We went to Malvern for breakfast, a good country breakfast.

Despite the continued rain we decided to stop by Rockport Ledge to see if anyone was back in the water. The lightening had stopped but we were still getting some showers. Shortly after we arrived boaters started forming up below the ledge to play.

Here are a few of the shots we got that morning. 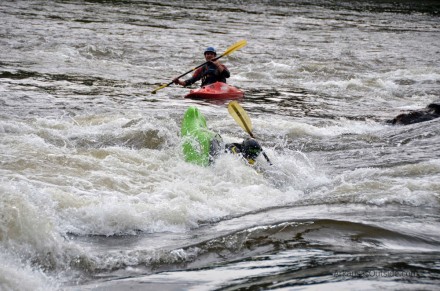 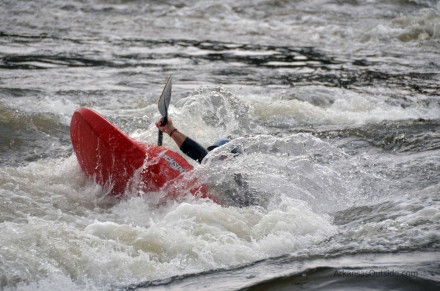 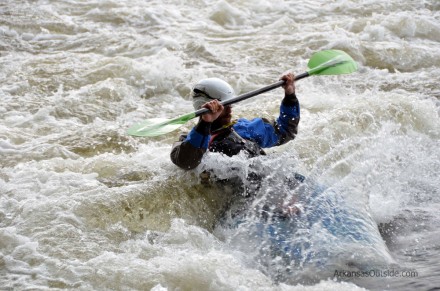 After an hour or so of watching the kayakers we decided to head home. The rain was still falling and we had a lot of wet stuff to unload and clean up. Of course as we headed back to Little Rock the skies cleared up and it turned into a beautiful day. All I could think about was how most of the paddlers were back on the river. The lucky ones.

If you would like to keep up with paddlers from across the state, find out more about some of the special places to float or be invited to events like Rendezvous, please join the Arkansas Canoe Club. They have chapters throughout the state. Join their forums and find out about spontaneous floats. The club also sponsors several levels of classes and workshops. It’s a great group of people who really know how to enjoy the Natural State.