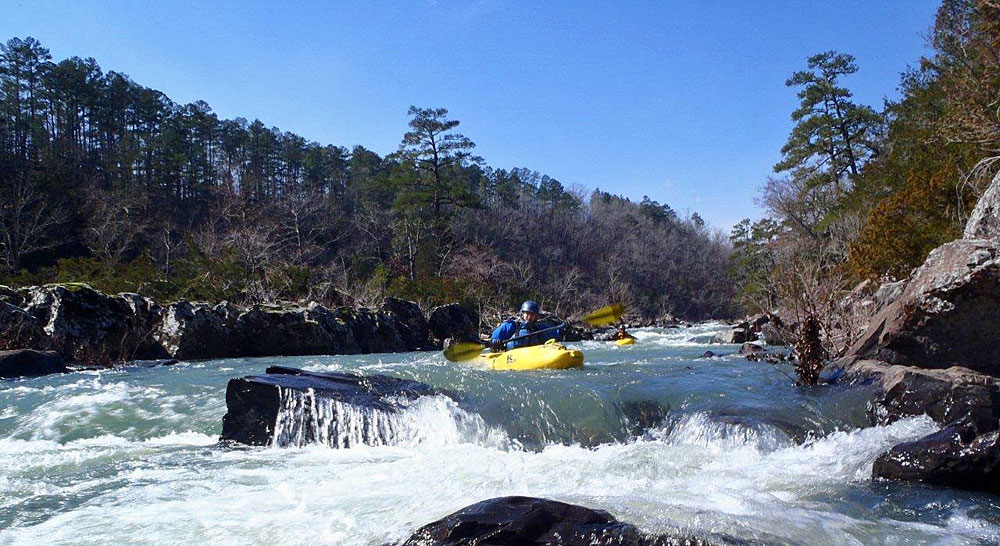 The Cossatot River was running last weekend, and so were all the whitewater paddlers in the state. Our river trip began at the Ed Banks low water bridge. As we unloaded boats and put on our gear, we were meeting tons of new people and trying to catch up with other friends. It’s amazing anyone ever got on the water.

It is important to note real fast that my family is fairly new to the sport and all of our skill levels vary. We love being outdoors, but it was only last year we came to kayaking. My stepdad Bryan and I have done some class III to IV stuff, but are by no means class IV paddlers. My mom has only really done II to II+, and has never had to do complex maneuvering. In other words, this river challenged all of us.

Sliding into the water it’s easy to forget to pause and take in the scenery. The Cossatot is a beautiful river no matter the sport that calls you there. Since we started at Ed Banks, we had the chance to get situated and talk and look around before the first rapid, Zig-Zag. This is a class III with a huge eddy just below the top on the river left. Coming from there unscathed, we advanced on with confidence through to the Esses, another class III. Once again we all came out with all smiles thanks to help and guidance from our friends. The area from here to our next checkpoint, the Sandbar Bridge, was beautiful too. Another group or two caught up to us right above the bridge with a big raft. Guess what’s on my bucket list now?’

Past a quick break at the Sandbar Bridge, we were quickly confronted by the falls. We have heard of this area ever since we started paddling, but you never know what the water feels like until you’re there. The Falls start out as a class III rapid, called the Cossatosser, which is followed by Eye Opener. This is where the real story starts. My mom, bless her heart, was the last to come through Eye Opener. She came down with a little trepidation, I think, but she styled it. At the bottom, though, she was so proud of herself she forgot to paddle for the eddy at the bottom. Eventually she was swept down and had to turn and face to next obstacle, BMF, without any briefing beforehand. She chose her line, but she didn’t choose the right one and was flipped at the bottom and eventually swam from her boat and had to grab the rope thrown to her.

You may think that was a very straightforward rescue but here’s the real problem: only yards down from where she was fished out is Washing Machine, a class IV and the hardest part of the falls. We were all very glad that she caught that rope.

After the fiasco some of our group waited on the rocks near the Washing Machine, and some of us ran it again. From there we opted to float the rest of the way instead of carrying our kayaks back up the Falls to the Sandbar Bridge. Our friend Cowper dragged my boat up a 15 foot tall rock that I seal launched from. Of course I have no video, but if you accuse me of making this up I will come after you. Free falling from that rock was much scarier than running through the Washing Machine.

The rest of the float was class III and fun, with the exception of Devils Hollow Falls, a class IV that some portaged. After that, we paddled on to the takeout, gathering trash and talking.

We ate supper with friends at Little Italy, in Glenwood. I think we depleted their bread supply. That’s some dang good bread they have there. Tired and content, we headed home. We were trying not to doze off in the car, but not all of us were successful.

Thanks to John Barton for the photos.