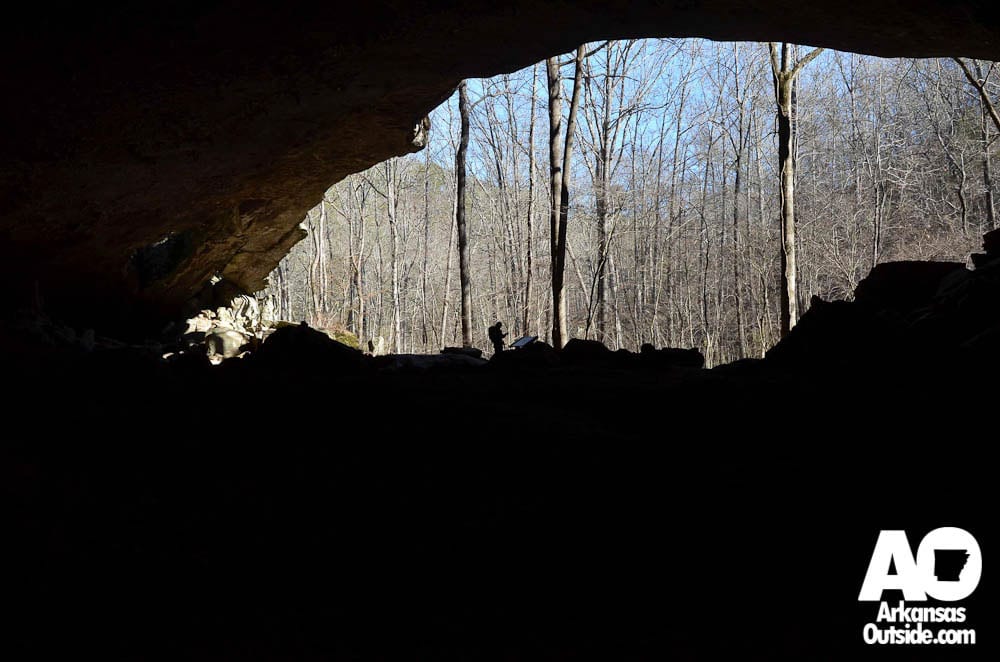 Lisa and I have developed a practice of finding short hikes that can break up long drives. It’s become a ritual on drives from Little Rock to Eureka Springs. We try to plan out our lunches to coincide with the hike, normally between 3 or 4 miles total. This started a couple of years ago with a stop at Pedestal Rocks  just off Scenic Highway 7 near Pelsor, Arkansas. On the way home we stopped again to pick up a different loop in this beautiful spot.

This past weekend we made another trip to the historic town, this time stopping at what was once an Arkansas State Park but is now a part of the National Park Service, Buffalo Point Recreation Area on the Buffalo National River. The park was given to the National Park Service when much of the Buffalo River watershed became the first National River in the country back in the early 1970’s.

We had never taken the hike to the Indian Rockhouse Cave within the park. I’ve seen many photos of it and wanted to see it for myself. It is one of the largest bluff caves in the Ozarks. I highly recommend using Tim Ernst’s Book, Buffalo River Hiking Trails, to guide you.

Hiking down out of the park we are not only attuned to the nature and wildlife but also the human history of the area. Three eras are easily experienced during the hike: the native American history in the Ozarks, the 1800’s Zinc mining boom and 1930’s CCC contributions to the park systems of Arkansas. After a nice waterfall that would have probably been running better in the Spring, we came to an abandoned zinc mine from the late 1800’s. Zinc mining brought the first humans of European descent to the area in large numbers. It’s what gave nearby boom towns like Rush their names.

Following Panther Creek upstream (actually uprock during our hike as there was little water to be seen) we passed a smaller bluff cave with a hole in the roof. It was nice and cozy but not the big cave we were looking for. We also passed a  unique formation in the creek bed that was reminiscent of a miniature slot canyon.

Eventually we walked down a short slope and around a bend. Since it was leaf-off you could barely make out a large dark spot in the grey bluff through the woods. As we walked a few more feet we could see the enormous opening of the cave. It’s gigantic!

The floor is a dusty mixture of boulders, small rocks and a fine sand. Standing on one of the large rocks is a little spooky when you look up and realize that it was once attached directly above you.  We could hear the spring in the back left of the cave conveniently located so residents didn’t need to go outside in the cold or rain to get some water.  To the right  is a large hole in the ceiling that looks like it’s hinting at where the next rock on the floor will come from. An interpretive panel is at the entrance to give you more information.

After a round of pictures we took a seat on some rocks at the entrance and made a glorious lunch of some peanut butter and jelly sandwiches and a couple small bags of Cheetos. Looking out of the cave I pictured young children playing in the woods, doing chores and looking forward to going hunting one day. I imagined that a cave of this size could house a good size group and along with other caves in the area formed a reasonably sized community. All over 10,000 years ago.

We soon packed our things up wondering what was in store for the return trip. This is one of those nice hikes that is more of a loop giving the hiker new views to enjoy throughout the day. Immediately upon turning up the trail we came to a beautiful creek area where we took some more photos, drank some water and prepared ourselves for the uphill trip out of the canyon.

Being mostly uphill, the hike out made the day feel warm but we were soon near the end when we came across the CCC quarry. Back in the early 1930’s when this area became a state park, the Civilian Conservation Corps came here and built cabins, trails, bridges and other structures that made the area accessible to casual travelers. Materials were found locally including all the rock that was used and can still be seen today in buildings throughout Buffalo Point.

We were soon back at our vehicle and ready to continue on our trip to Eureka Springs. Doing these hikes in the winter offers a different experience and often a quiet one. Since not a lot of people think to go when it may be colder we usually have much of the hike to ourselves. We never saw another human during our hike but we were occasionally disturbed by some very large deer as we hiked the area. If you go to do this hike remember to carry water, some food and wear appropriate footwear. Also practice Leave No Trace principles.