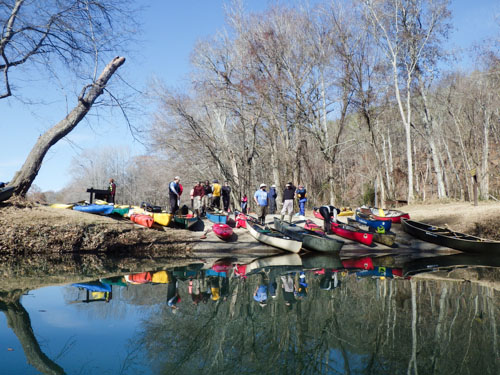 Arriving at the Pinnacle Mountain parking lot, we found ourselves in an anthill of activity as boats were toted down from the trucks and shuttles were being set at the takeout. It was the first day of 2014, and Arkansas Canoe Club boaters from all over Central Arkansas were excited to start the new year with a float on the Little Maumelle. Quite a collection of kayaks and canoes developed at the water’s edge. Gathered around them were almost forty new and old friends chatting for the first time since last year. (Sorry, I had to make that joke somewhere.)

Our floatilla of brightly colored boats slowly snaked through the faded grays of the trees on the green murky water. While it was not nearly as cold as I had expected, we were bundled up. Early on in the float, we encountered a narrow spot with a couple of friends standing by to help those who needed a push.  Then we came upon a huge, partially submerged tree that had fallen across the water, almost completely blocking our passage. The root ball stood a few feet away from the bank, which was the only place we could get through. My step-dad stood nearby to help pull people through if they had difficulty.  I was ready with my camera if someone to fell in, but I was unrewarded.

The channel widened, the water slowed, and more trees stood in the river. Before we stopped for lunch, Debbie Doss explained the history of the ACC’s New Year’s Day Red Hot Cider Float.  To start out, some years ago, a small group of paddlers were determined that they should bring in the New Year with a trip, even when the weather was terrible. She said there weren’t that many participants and they didn’t go to the same river every year, but the trips were pretty interesting. They decided that they wanted more people to join them, so they chose the easily accessible, easygoing little Maumelle River as the venue of their next float. Debbie said that they were surprised to paddle with about 15 people that time, and that ever since then, more have shown up each year. The record was set at our float: 37 boats, two of which were tandems.

We paddled up to the break spot and everyone unloaded boats while one group tried halfheartedly to start a little fire. The kindling was put out once we realized that a stove was on its way, being carried at the back of the group by Debbie’s husband, Cowper. Debo brought out the cider, the Red Hots, and a great big pot. Chairs were set up and people chatted and ate lunches and shared treats, against beautiful backdrop of the wide, slow river and its cypress trees. The cider was surprisingly good and heavenly warm, and someone brought cupcakes with ice cream frosting.

Once the cider was finished off, we got together for a group photo, just as hard as herding cats.  Heather Huckeba directed us for a group picture while on the water. My ridiculous mom remained on the bank and climbed a tree to take a picture from there.

There’s place close to the take out where several huge pipes cross the river, and some concrete pilings stand in the water near it. Gordon Kumpuris decided that they looked like they needed jumping from. And that’s just what he did, hauling his kayak up on a strap, settling into his seat, putting on his spray skirt, and then doing a graceful face plant into the cold water.

I was one of the first to arrive at the private boat ramp where we took out, upriver from Two Rivers Park. Most of the group was right behind me, and we worked together to pull boats out of the water to load onto trucks. The last few to drag in were loaded up with trash, so you can safely assume Cowper was involved, along with my mom. The notable lack of trash along the river is great, given it is an urban stream. The canoe club (and probably others) have been diligent about picking up litter from the water. The group had loaded up a traffic cone nevertheless, along with the usual bag or two of bottles and cans.

The shuttle was just about done by the time they arrived, so we loaded up and went to dinner. Chicago Bob brought guacamole to share and I fell asleep with my head on a table. I think it’s going to be a good year.