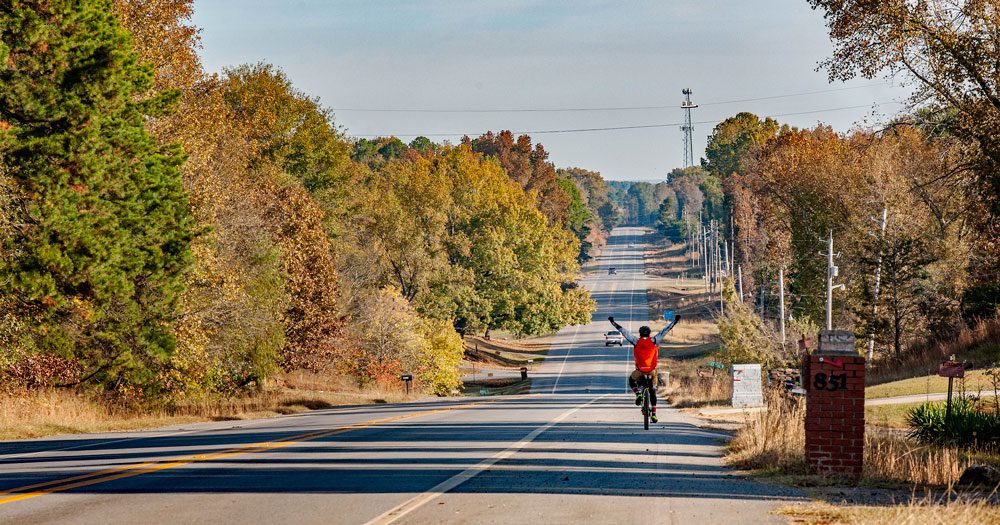 Arkansas’ first U.S. Bicycle Route is also the first segment of USBR 80 designated in the country. The new route travels from the Mississippi River on the Tennessee border to the Arkansas River at North Little Rock, through rural areas and historical downtowns of the Arkansas Delta. USBR 21 in Tennessee begins in the Cumberland Gap on the Kentucky border and continues through the Tennessee River Valley to Chattanooga and the Georgia border, linking Cleveland to Atlanta.

The realignment of routes through Minnesota, New York, and Ohio were made based on feedback from cyclists and local communities, as well as the completion of infrastructure improvements and other projects.

“Milestones matter, and the fact the USBRS is closing in on the 19,000-mile mark speaks to the successful collaboration between the American Association of State Highway and Transportation Officials (AASHTO) and our partners at Adventure Cycling,” said Jim Tymon, AASHTO executive director. “State departments of transportation are focused on delivering a safe, multimodal transportation system that offers mobility for all, and opening new routes in new states like Arkansas, which joins the USBRS this year, shows this partnership’s commitment to do just that.”

The U.S. Bicycle Route System is a developing national network of officially designated, numbered, and signed routes that use existing roads, trails, and other facilities appropriate for bike travel. It will eventually encompass 50,000 miles of routes and open new opportunities for cross-country travel, regional touring, and commuting by bike. It also benefits communities by providing new bicycle routes, enhancing safety, and increasing tourism and economic activity.

Digital maps for all designated U.S. Bicycle Routes are available to the public for free on the Adventure Cycling Association website.

The nonprofit Adventure Cycling Association promotes bike travel and is the only organization that coordinates the national development of the U.S. Bicycle Route System. Adventure Cycling staff offer technical assistance, volunteer coordination, and outreach to help states achieve the official designation of routes.

“This round of designations marks exciting progress for this project,” said Jennifer O’Dell, Executive Director of Adventure Cycling. “I’m particularly excited to see the first-time designation for Arkansas, a state I called home for many years. Thank you to Adventure Cycling members and donors who support this work.”

Highlights of the newly designated U.S. Bicycle Routes include:

USBR 80 (177.5 miles): The first segment of USBR 80 in the country travels west from West Memphis, on the Mississippi River at the Tennessee border, to North Little Rock, where the Big Dam Bridge crosses the Arkansas River. Along the way, it passes through rural areas and historical downtowns of the Arkansas Delta, including Marianna, home of the James Beard Award-winning Jones Bar-B-Q Diner, and Stuttgart, known for its waterfowl tourism on the Mississippi Flyway. The route will eventually continue to the Oklahoma border. USBR 80 map.

USBR 21 (250.4 miles): USBR 21 begins in Cumberland Gap National Historical Park, on the Kentucky border, and travels southwest through the Tennessee River Valley to Chattanooga and the Georgia border. It rounds Norris Lake, visits Knoxville, passes Great Smoky Mountains National Park, and crosses the ridges east of Chickamauga Lake before making its last stop in Chattanooga. With the designation of USBR 21 in Tennessee, the route now links Cleveland to Atlanta. USBR 21 map.

USBR 41: Added off-road trails to USBR 41 between Grand Portage State Park, at the Canadian border, and St. Paul, including portions of the Gitchi-Gami State Trail on the north shore of Lake Superior and through Duluth. USBR 41 map.

USBR 11: Moved the northern end of USBR 11 between Sodus Point and the Pennsylvania border near Lindley from a residential area to Sodus Point Beach, on Lake Ontario. USBR 11 map.

USBR 21: Completed the off-road Beechmont Bridge Connector over the Little Miami River in Cincinnati on USBR 21 between Cleveland and Maysville, on the Kentucky border. USBR 21 through Ohio is now more than 90 percent off-road trails. USBR 21 map.

USBR 25 North: Moved USBR 25 North, between Toledo, on the Michigan border, and Cincinnati, to the east side of the Miami River in Dayton. USBR 25 North map.

USBR 30: Extended the off-road North Coast Inland Trail to the Village of Elmore on USBR 30 between Conneaut, on the Pennsylvania border, and Toledo, on the Michigan border. USBR 30 map.

USBR 44: Made minor realignments on USBR 44 between Masillon, west of Canton, and the Indiana border. USBR 44 map.

USBR 50: Made minor realignments on USBR 50 between Steubenville, near the Pennsylvania border, and the Indiana border. USBR 50 map.