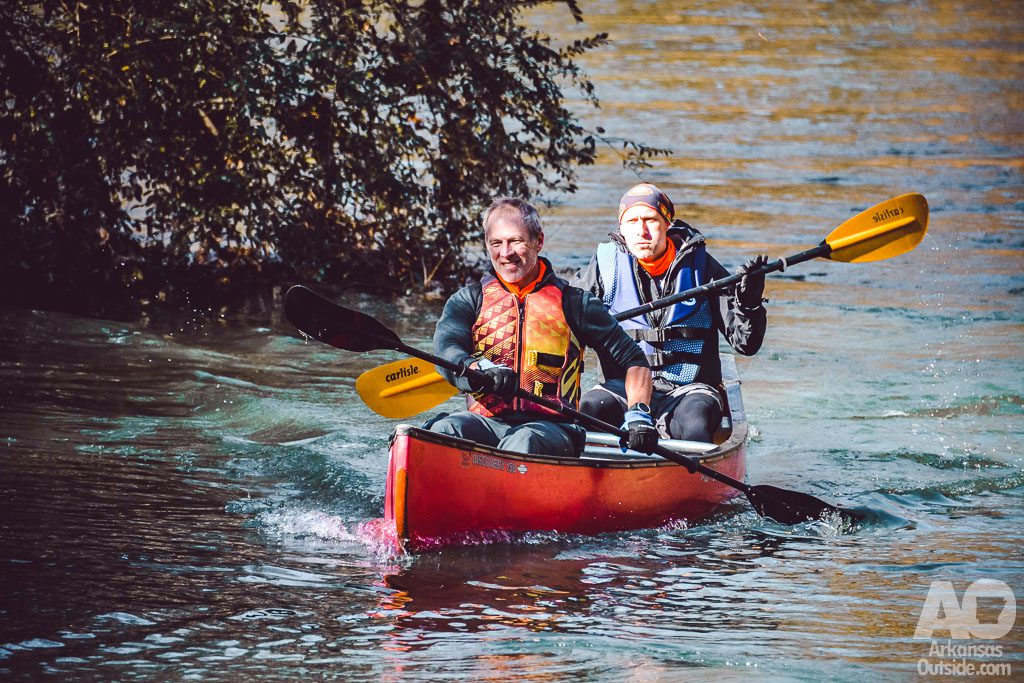 When it comes to adventure racing, central Arkansas has maintained its pedigree for more than two decades. The new style of multisport arrived in the late 1980s; sometimes called Expedition Racing, Adventure Racing (AR) is a combination of trail running, rock climbing or other rope work, paddling, mountain biking, and orienteering (navigation by map and compass). The feature that really sets AR apart from other multisport events is the team element. While soloists eventually were allowed to race, AR started as a team sport. The team has to stay together, usually within a designated distance of each other. All disciplines are completed together.

Raid the Rock Adventure Race came on the scene in December of 2001, managed by the Arkansas Traveler Team. Team Traveler was an international adventure racing team having competed in Raid Gauloises in Nepal (2000) and Vietnam (2002). Billed as an “Urban Adventure Race”, the 2001 event featured a night mountain bike ride from the Rivermarket Pavilion through a parking garage, Knopp and Allsopp Park, and out to Pinnacle Mountain State Park where after climbing up and over Pinnacle Mountain, teams floated the Little Maumelle to Two Rivers Park where they had a climbing section in the trees. After a quick paddle across the Arkansas River to Cook’s Landing, teams trekked on the North Little Rock side of the river and then back into Little Rock for a rappel down the old YMCA tower and a run back to the Rivermarket for that finish. It was a heck of a beginning to Adventure Racing for central Arkansas.

Over the years, Team Traveler turned over the race to various other directors with Traci Berry taking it over in 2012. Traci is a well-known outdoor sports enthusiast in the state having managed ropes courses in the Buffalo National River area. She has been the trails coordinator for Northwoods Trails in Hot Springs for the past 4 years. Last year Rachel Furman joined Traci to share race director duties. Rachel is a world-class adventure racer having competed on the United States Mountain Biking Orienteering Team and a veteran of national and international adventure races. They’re a great team for creating a challenging race.

There were many things this year that were reminiscent of that first race in 2001, but it was certainly not the same. Starting at Pinnacle Mountain State Park, racers were faced with choices right from the start. The 24-hour racers started an hour before the 8-hour racers. The 15 teams consisting of more than 40 racers from several states were presented with the option of mapping just the first section or mapping the full course before leaving headquarters. Plotting points by UTM coordinates on a topographical map takes both skill and patience, some teams find mapping while mentally and physically fresh is a better option than trying to do it on the fly or when tired. Once moving, the 8-hour racers could choose a mountain biking orienteering section first or save it for the end of the race. Racers also were reminded at the start that the goal was to get as many checkpoints as they could, but they probably couldn’t get all of them. Strategy is the name of the game here, deciding which checkpoints to spend time looking for it and which ones to forfeit.

After an out-and-back paddling section on the Little Maumelle River where teams had the opportunity to grab more checkpoints, the race activity moved to the Rattlesnake Ridge Natual Area. From the transition area next to the parking lot, teams moved to rock climbing, mountain biking, or trekking. Teams had the option to do them in the order they desired. Once teams finished at Rattlesnake Ridge, 8-hour racers headed to the finish or the mountain bike orienteering section if they hadn’t done it already. The 24-hour teams headed for the Ouachita National Trail to mountain bike the section from Highway 300 to Lunsford Corner (under a special use permit with Central Arkansas Water) followed by a 10-15 mile trekking/orienteering section and then a bike ride back to the finish.

Congratulations to all of the teams who participated this year. Just competing in this kind of event is award-worthy. Organizing and executing this kind of race takes a lot of support, thanks to the race organizers, volunteers, and land managers who support adventure racing in Arkansas.

Over the past 25 years, Adventure Racing has been a part of the Arkansas outdoor recreation landscape. Early races like the Ozark Challenge near the Mulberry River, several years of an Arkansas Sprint Adventure Race Series, and multiple similar races like the Rugged Man in Glenwood, AR, 40 Acres of Hell in Russellville, and The Fort Chaffee Challenge in Fort Smith have kept adventure racing alive but no annual race has had the staying power of Raid the Rock. In 2023, a new adventure race will step into the scene, Expedition Ozark, a well-funded and organized race out of Northwest Arkansas will continue the strong adventure racing tradition in Arkansas…and of course, the 2023 Raid the Rock.