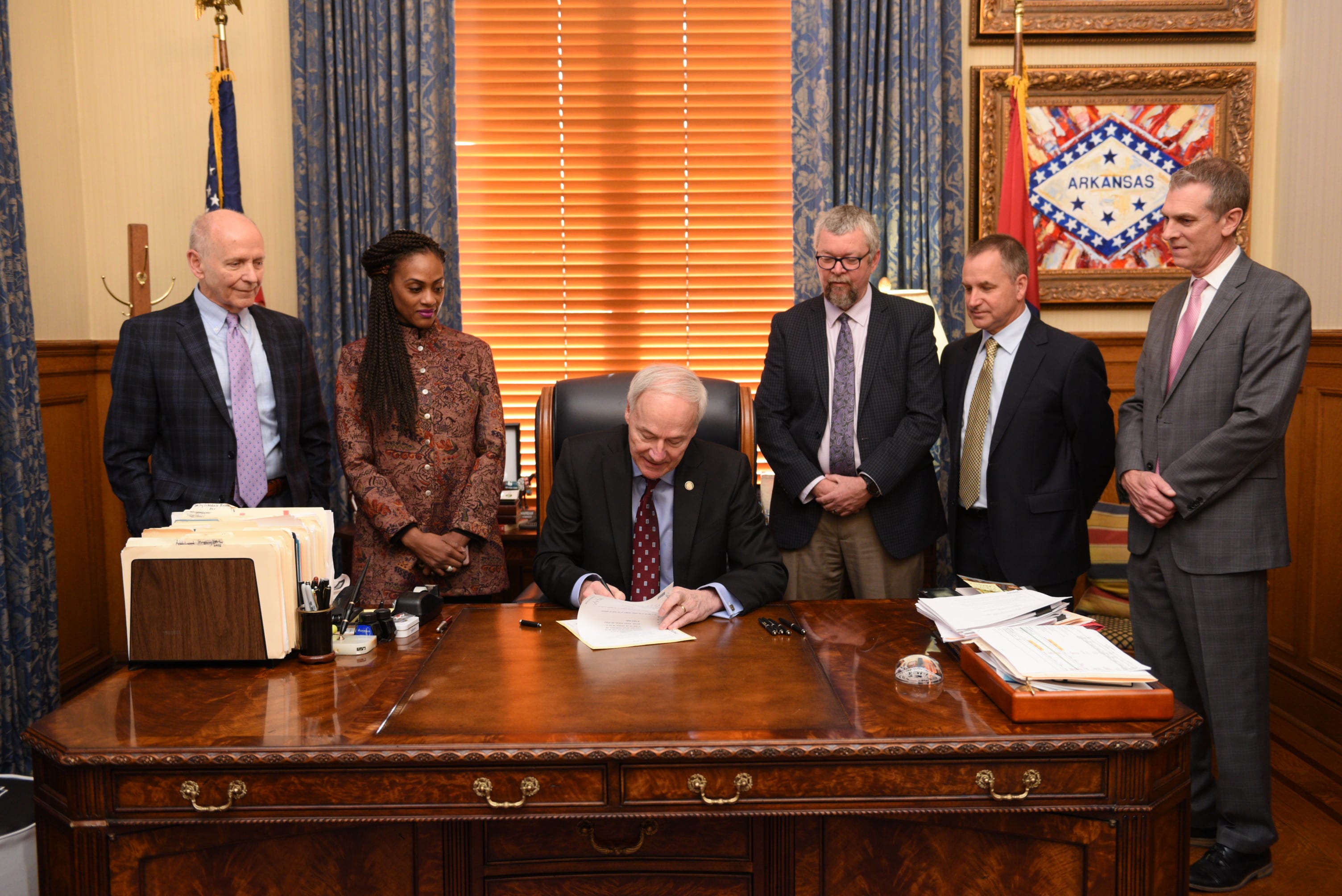 The Arkansas Stop – Bicycle Friendly Legislation is Signed into Law

Governor Asa Hutchinson signed Arkansas Act 650 of 2019 making Arkansas the second state to make it legal for people traveling by bicycle through the state to treat stop signs as yields and red lights as stop signs. The Governor’s Advisory Council on Cycling, a group representing local businesses, bicycle advocates, and various government agencies, recommended the law. The law does not change any right of way for vehicles using the roads and all other traffic laws still apply.

Governor’s Advisory Council on Cycling Chairperson Joe Jacobs said, “This change in traffic laws allows for cyclists to more safely navigate intersections since they’ll be able to move through before traffic begins to flow during light changes.

This will also allow for better traffic flow in our cities as cyclists will no longer need to hold up traffic at the lights or stop signs. Cars and trucks won’t be stuck behind them as they start moving and will be better able to make the next timed light.”

The bill was supported by the League of American Cyclists, PeopleForBikes, and local advocacy groups such as Bicycle Advocacy of Central Arkansas and Bike NWA.

“This Act is likely to improve the safety of bicyclists by promoting the use of side streets and lessening the time that bicyclist are exposed to dangers at intersections,” said The League of American Bicyclists Policy Director Ken McLeod.

State + Local Policy PeopleForBikes and Bicycle Product Suppliers Association Director Morgan Lommele said, “Studies show that bicyclists are safer when they are able to get a head start at intersections, and they become more visible to the drivers behind them, which helps avoid crashes and keeps all road users safe.”

Crafton Tull Vice President and Advisory Council member Dave Roberts added, “By making it easier for cyclists to move through our cities for commuting to work, school, medical care, shopping and more, this Act will encourage better health among our citizens and less wear and tear on our roads saving tax dollars locally and statewide.”

Although many states have similar laws specific to either stop signs or red lights, Arkansas is only the second state to make the law cover both. Idaho was the first to do this in 1982. Cyclists commonly know the law as the “Idaho Stop Law.”

Former Little Rock Mayor and Arkansas Tourism Director Jim Dailey represents the Arkansas Department of Parks and Tourism on the council. He said, “Arkansas has made great strides in marketing itself as a bicycle-friendly state. This law will cement us as the “Cycling Hub of the South.”

The bill was sponsored by state Senator Missy Irvin of Mountain View and co-sponsored by state Representative Jay Richardson of Fort Smith. “I was proud to bring a bill forward that made our roads safer for cyclists, improved traffic flow, and boosts tourism. This is a win for everyone in the state,” said Senator Irvin.

Senate Bill 388 passed the Arkansas Senate 33-2 and then the Arkansas House 75-4 with 21 representatives not voting. It will officially become law on July 1, 2019.