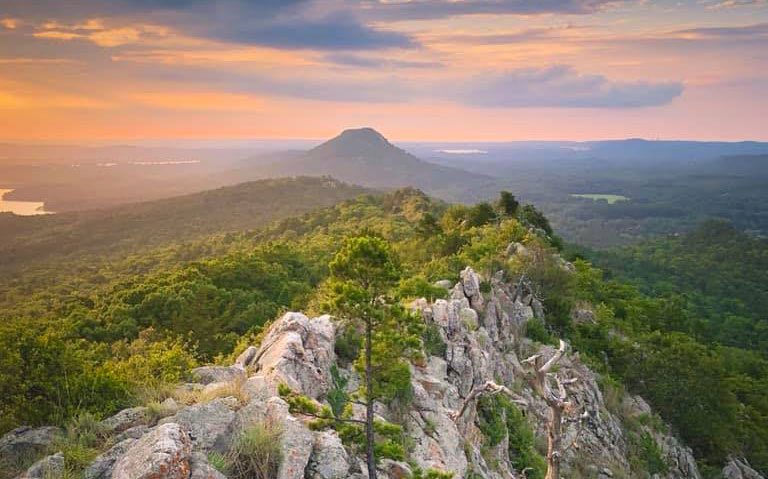 Yesterday we posted our top 10 articles from 2022 based on their popularity among our readers. Here are four stories that have been featured in ArkansasOutside.com in multiple articles that we recommend you follow going into 2023. These are some of the stories we expect to continue to talk about in the next year…and beyond.

There are two stories here. The first is the ongoing study to allow e-bikes to use mountain bike trails in the Ouachita and Ozark-St. Francis National Forests. The process will take a while as public input and eventually, on-trail testing takes place. The Ozark Society has come out against the change in policy. The plan includes testing on 3 of Arkansas’s 5 IMBA Epic trail systems, The Womble, Upper Buffalo, and Syllamo trails, and will explore e-bike category recommendations, environmental, and economic impact.

The second move by the USFS is happening in the Ouachita National Forest. New trails are being proposed between Rich Mountain and the City of Mena in western Arkansas. Earlier in 2022, a public meeting was held in Mena featuring city officials, leadership from the Arkansas Department of Parks, Heritage and Tourism, Suzanne Grobmyer of the Arkansas Parks and Recreation Foundation, and Ouachita National Forest leadership. The purpose of this meeting was to test the local temperature on creating mountain bike trails connecting Queen Wilhelmina State Park and the City of Mena. Following a fairly positive reaction by the public, a memorandum of understanding was entered into by these entities in early December. If the plans continue to move forward, a bike park unlike anything else in Arkansas could make Mena the next big mountain biking town. 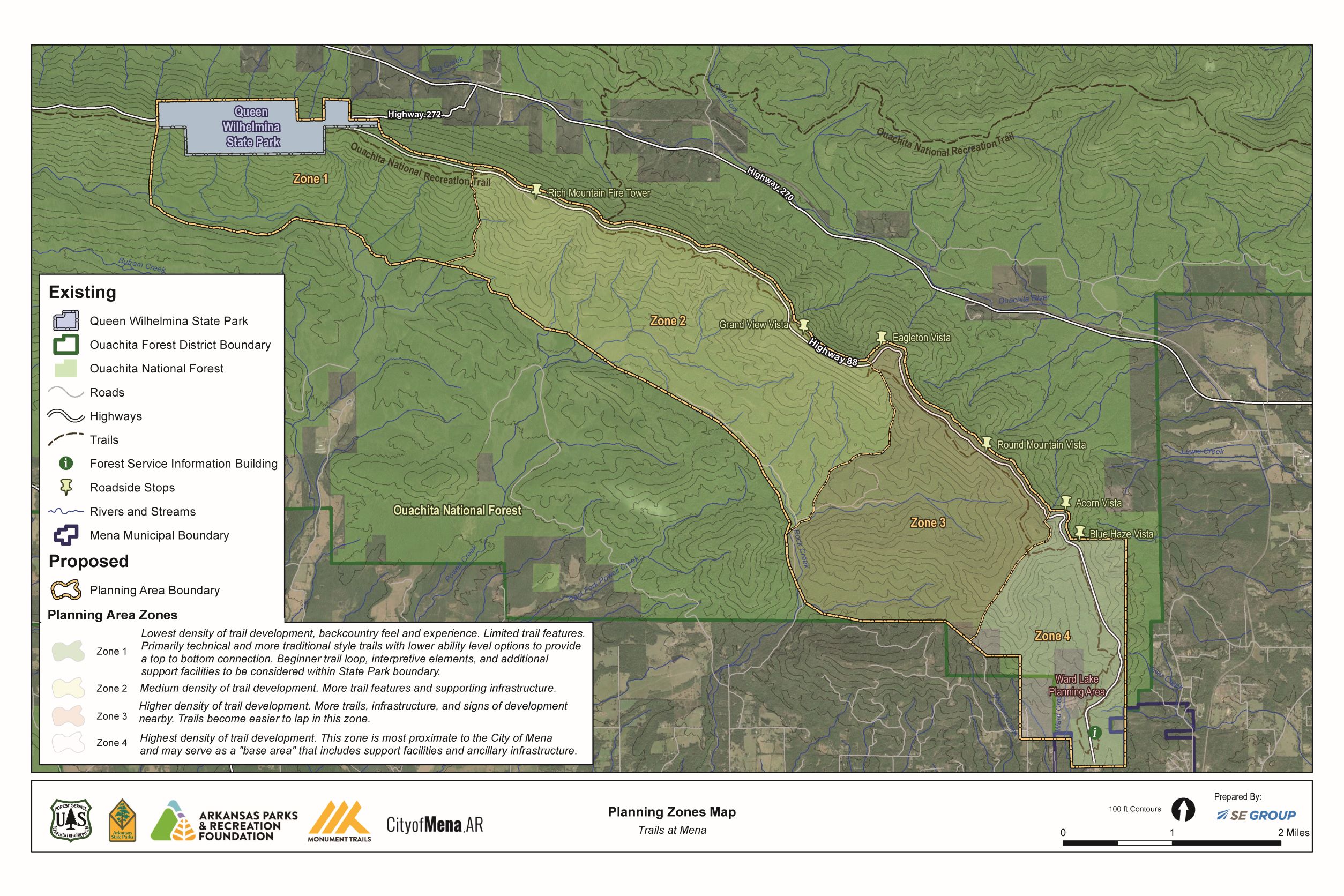 Zones 1 through 4 show areas that may represent different types of mountain bike trails.

The Rise of Delta Gravel

Cyclists have been riding the hundreds, maybe thousands, of miles of gravel roads in the Arkansas Delta for years. The gravel in the area is much more diverse than many realize and that was shown in two events this past year. First, last spring brought the inaugural Delta Grind ride, utilizing both the “low road” and the “high road” between Helena-West Helena and Marianna, Arkansas. There were long flat stretches, levee riding, and rolling, canopied roads. Finishers were treated to great Delta music at the post-ride party. The second ride was the Birdeye Gravel Festival, a two-day extravaganza of riding, music, and food. These events were both conceived by the folks at studioDrift, a non-profit dedicated to improving the quality of life of the Arkansas Delta. Those who attended these events certainly enjoyed quality events. We look forward to more of these rides in the coming years.

One of the riders from the Birdeye Gravel Festival was so inspired by the event that he is currently working on creating a state gravel series that will involve rides/races around the state including the Delta. Bobby Rickard, the voice behind the Natural State Bikes Podcast will announce dates and locations soon, watch ArkansasOutside.com for more information.

The Growth of Small-Town Trail Systems

We are all aware of the growth of mountain biking trails in Northwest Arkansas fueled by local investment spearheaded by the Walton Family Foundation but did you know that new mountain bike trails are popping up around the entire state? Fueled by local demand and far-sighted leadership, local governments are finding ways to finance local mountain bike trail systems. Using money from local budgets, federal and state grants, and yes, the Walton Family Foundation, these communities are finding ways to add mountain bike trails and other alternative outdoor recreation more for the quality of life for locals than as a tourism attractor. We expect to see this trend continue through 2023 with more trails in central Little Rock, the Arkansas River Valley, and the western Ouachita Mountains.

And this just came across the desk: According to a recent International Mountain Bicycling Association News Release, An IMBA Trail Accelerator Grant has been awarded to Pine Bluff, Arkansas.

According to the release, “This project will examine Jefferson County for the best opportunities for trails, both shared-use and bike-optimized, since this area has no mountain biking trails currently. Led by Go Forward Pine Bluff, a community development organization, this effort will establish priority lands where trails will most benefit the community. Goals include increasing community health, engaging youth in the outdoors, and creating economic tourism draw for nearby communities, which also lack trails.”

Some major changes are happening in public land management and supportive funding sources as we enter 2023. Scott Simon has left his role as the State Director of the Arkansas Chapter of the Nature Conservancy (TNC). Over the years Mr. Simon has worked closely with various state land managers including the Arkansas Natural Heritage Commission (ANHC) and the Arkansas State Parks. Many of these properties were originally acquired by the Nature Conservancy and later transferred to government public land agencies. The Arkansas TNC currently manages both Rattlesnake Ridge and Blue Mountain just outside of Little Rock along with the ANHC and Arkansas State Parks is one example. A replacement has not yet been named.

With a new governor comes new agency leadership. Earlier this month, Governor-elect Sarah Huckabee Sanders named Mike Mills to replace Stacy Hurst as the Secretary of the Arkansas Department of Parks, Heritage and Tourism (ADPHT). Mr. Mills started the Buffalo Outdoor Center in the 1970s and has been a force in making the Buffalo National River a key driver of outdoor recreation and tourism in the state. He also spent several years on the State Parks, Recreation, and Travel Commission. It should be interesting to see what direction he takes the department in the future. The ADPHT consists of the Arkansas State Parks, the Arkansas Office of Outdoor Recreation, and the Arkansas Natural Heritage Commission, among others, including Arkansas Tourism, so this will be impactful to outdoor recreation in the state.

Along with Mr. Mills taking the helm at ADPHT, Suzanne Grobmyer has signed on as his Chief of Staff. Ms. Grobmyer has been the Executive Director of the Arkansas Parks and Recreation Foundation since its inception. The APRF has been instrumental in funding the Monument Trails system in Arkansas State Parks and has worked closely with the US Forest Service in several trail projects including the new trails near Mena, AR. Her position has not yet been filled.

We will work on getting interviews with these leaders once they have a chance to get their feet on the ground in their new positions. Speaking of leadership, We hope that Governor-elect Sarah Huckabee Sanders follows her father’s lead and continues his work to improve the conservation agencies of Arkansas. Governor Mike Huckabee and First Lady Janet Huckabee were beyond supportive in passing the 1/8 cent Conservation Tax, also known as Amendment 75 which was key to making the Arkansas State Park system one of the best in the country. Over a quarter of a century later, this support could use some updating.

There are, of course, other stories that we will be watching next year including Bentonville becoming the new home to the US Mountain Biking Team, the new US Bike Route System designation going through Arkansas, and the Rural Recreational Roads Initiative as it grows across the state. We will also continue to report on new outdoor recreation stories throughout the year. Continue to check our Calendar of Events page for events around the state all year. We’ll see you here and on the trail.